Nunavut MLAs approve changes to how liquor is sold in Nunavut 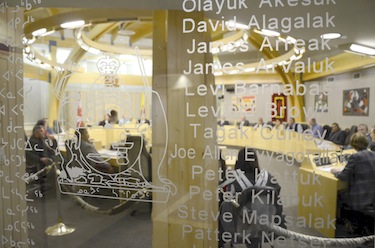 Bill 64 on amendments to the Nunavut Liquor Act passed through the committee of the whole, a third reading and received royal assent all within five hours on Sept. 17, now making the amendments law. (PHOTO BY DAVID MURPHY)

Nunavut is one step closer to opening its first government-run liquor store.

The assembly passed amendments to Bill 64, on the liquor act, through three stages of the legislature on its final sitting as an assembly Sept. 17.

Bill 64 passed through the committee of the whole, a third reading and received royal assent all within five hours, now making the amendments law.

As sponsor of the bill, Cambridge Bay MLA Keith Peterson, also the minister responsible for the Nunavut Liquor Commission, listed the bill’s aims, which allow the commission to:

• change the way it sells liquor in Nunavut;

• increase personal importation limits to be more in line with other Canadian jurisdictions.

But Peterson warned the bill might not necessarily mean a liquor store is coming to your Nunavut community overnight.

That’s because there would be a “measured approach,” which means the government would speak to the departments of health, justice and family services in any community before opening a store — and after pilot testing.

“This change to the legislation does not require us to open a storefront operation. Also, a retail outlet would not be opened in any community without further consultation and community support,” Peterson said.

A community would have to decide the location, hours of operation, product, limits of quantities and “policies to reduce potential harm” before a store could open.

“The government would maintain a necessary flexibility to facilitate a quick reaction to any situation that might arise, including ability to close the store and end the pilot project,” Peterson said.

Peterson said changing the legislation would lay the groundwork for “reducing harm and removing the bootlegging market.”

But more liquor may now be brought into a community from other jurisdictions without an import permit.

Before, you could only bring 1,140 ml of spirits or wine or twelve 355 ml containers of beer without a permit.

However, this increase does not apply to communities that chose to go dry.

Another amendment allows for the existing liquor revolving fund to be used for social responsibility campaigns.

“This is a key component of the proposal,” Peterson said, adding that promoting social responsibility is key to “discourage people not to drink because it [leads to] serious repercussions in terms of [fetal alcohol spectrum disorder], drinking-driving, violence.”

“It would allow us to put educational programs and other programs in place to help folks to understand the dangers of drinking, and it would benefit every community in Nunavut — whether it’s a wet community or restricted community or prohibited community,” he said.

Five MLA’s opposed the amendments to the bill — including the chair of the standing committee on legislation, Johnny Ningeongan, MLA for Nanulik.

Curley said during general comments, through an interpreter, that he feels there’s going to be more crime committed because of liquor stores in larger communities.

Curley also said the bill is going to encourage bootleggers, as people will be able to buy liquor in one community and sell it in other nearby communities.

Peterson later said that surrounding communities would be consulted if one particular community is granted a liquor store.

Peterson also said that the task force made many recommendations, but the important part of the task force’s report is the theme of the report.

“The overall theme of the recommendation was to liberalize alcohol in Nunavut, particularly beer and wine,” he said.

“They recognize prohibition has not been working — we all know communities in Nunavut where they are prohibited, and yet they have a huge problem with alcohol.

“We have learned from the Greenland experience when they had similar issues with alcohol in their country. They opened up beer and wine stores, liberalized access to beer and wine and drinking issues were reduced.”

To read the act to amend the liquor act, click here.