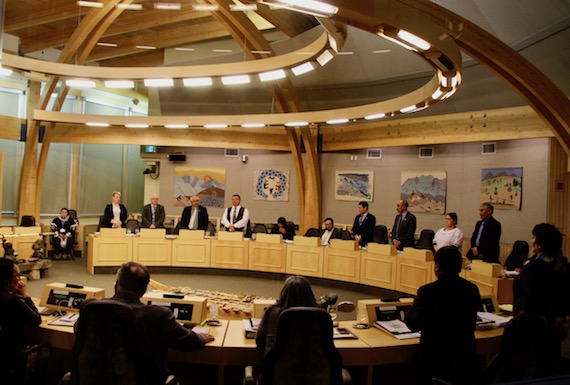 Nunavut MLAs vote in a motion to censure cabinet, Oct. 29. The motion passed with 13 in favour, six against and one abstaining. (PHOTO BY BETH BROWN) 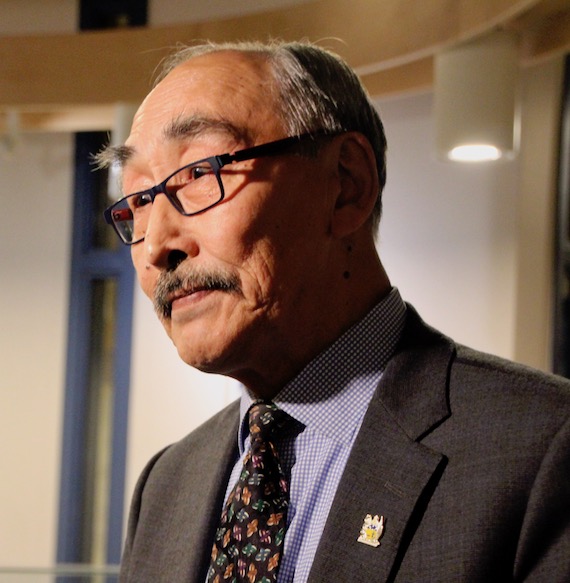 Thirteen of 21 MLAs in the house that day voted for the motion of censure, with six voting against it.

Pangnirtung MLA Margaret Nakashuk abstained while all other regular MLAs voted in favour. All cabinet ministers, except for Rankin Inlet South MLA Lorne Kusugak, voted against it. One member, Baker Lake MLA Simeon Mikungwak, was absent for family reasons and Speaker Joe Enook is not allowed to vote except to break a tie.

The motion stemmed from last week’s cabinet decision to remove all of Angnakak’s portfolios, Oct. 24, following a breach of cabinet confidentiality she committed on Oct. 23.

The move left members of the legislature with questions about the way the Nunavut cabinet dealt with Angnakak’s breach in comparison to how they dealt with a different breach by Education Minister David Joanasie.

That occurred earlier this year, when one of Joanasie’s staff members mistakenly emailed a confidential cabinet document on the Education Act to various stakeholders.

Following that breach, Joanasie conducted a departmental audit and issued an apology to members.

“I have difficulty accepting the explanation from the premier that the breach of confidentiality by the former minister and member for Iqaluit-Niaqunnguu and the breach of confidentiality by the minister of education are not the same,” said Rankin Inlet North-Chesterfield Inlet MLA Cathy Towtongie, who made the motion of censure. “I believe there’s a double standard.”

Because cabinet approved the removal of Angnakak’s portfolio, the motion applies to the full executive council, Towtongie said, stressing that the motion had nothing to do with gender, but with fairness.

Iqaluit-Manirajak MLA Adam Arreak-Lightstone said MLAs and members of the public still don’t know whether Joanasie was reprimanded following the breach made by his department.

Arreak-Lightstone—who posed the question on staff housing that led to Angnakak’s response and subsequent breach of cabinet confidentiality—took issue with the way Angnakak was “immediately, swiftly, publicly” disciplined, he said prior to Monday’s vote on the motion.

Cabinet minister Elisapee Sheutiapik said Towtongie’s motion is against the principles of Inuit Qaujimajatuqangit, while Netsilik MLA Emiliano Qirngnuq said “we need to stop putting each other down.”

Angnakak said she supports the motion, although she said she had nothing to do with putting it forward.

Angnakak continues to deny that she breached cabinet confidentiality, calling it a misunderstanding.

Savikataaq said today in the legislature that the two breaches are different, and that Angnakak had broken cabinet trust.

Speaking with reporters following the vote, Savikataaq, who also spoke to Nunatsiaq News before the vote, said he still feels his “actions were justified.”

He said he would make the same decision again, should a breach of the same magnitude occur.

“We’ll have to agree to disagree,” he said of MLAs’ concerns that the two breaches were treated unfairly.

“The regular members don’t approve of what we did. They’ve spoken, and we’ll turn the page and go on from here. There are so many other pressing issues in Nunavut that we have to deal with. This was a chapter in our government.”

Aggu MLA and ex-premier Paul Quassa, who seconded the motion of censure, said he and other MLAs do not dispute the seriousness of sharing cabinet documents publicly, but he said the treatment of the two breaches is inconsistent.

“Nunavummiut were hearing two different stories,” Quassa said. “We are going to be watching very closely as to what the next step of the government will be. The motion of censure is very serious and the government should not take this lightly.”

Consistency, transparency and the confidence of constituents is what he will be looking for, Quassa said.

MLAs will hold a leadership forum session on Friday, Nov. 2 to choose a new cabinet minister from among themselves.