“We would have been seen as not fulfilling on our commitment” 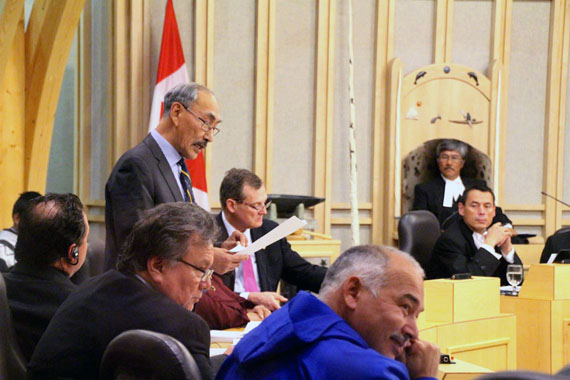 Nunavut’s education minister tried a month ago to reach a compromise with regular MLAs on changes to the Education Act—even agreeing to drop some of its more controversial parts—but it appears MLAs had their minds set on defeating the bill.

In an Aug. 18 letter from Education Minister Paul Quassa to Tom Sammurtok, chair of the Standing Committee on Legislation, the minister tried to find a way to fulfill the government’s educational mandate and work on a revised version of Bill 37, an Act to Amend the Education Act and the Inuit Language Protection Act, but his peace offering went nowhere.

The controversial legislation was defeated Sept. 14 in the Legislative Assembly after eleven regular MLAs voted against a motion from Quassa to have the bill move into Committee of the Whole for review.

This kind of review must happen before a bill gets third and final ready.

Sammurtok told Nunatsiaq News this week that the standing committee had already made its decision last May, when it announced it would not recommend the bill proceed.

“My committee decided that before the minister introduced his motion in the house,” Sammurtok said, referring to Quassa’s Sept. 14 motion to move Bill 37 into Committee of the Whole.

“There was already the decision that regular members did not want [further] debate on the issue.”

Sammurtok said MLAs all received Quassa’s concession letter mid-August, through most were on holidays or out on the land at the time.

The committee didn’t have a chance to sit down to discuss the letter until early September, he said.

Although Quassa sent the concession letter to Sammurtok in mid-August, it was not public until the minister tabled it in the legislature Sept. 15.

The concessions focused on pieces of Bill 37 that raised the most public concern, including sections on language of instruction at Nunavut’s schools and the role of district education authorities.

“The submissions concentrated on a series of very specific themes, rather than Bill 37 as a whole,” Quassa said in his letter.

“I believe strongly that by removing certain clauses, sub-clauses and paragraphs of the bill, we can, as law-makers, come to a compromise on the direction to take with respect to improving how our education system operates, while at the same time respecting the concerns found within the submissions.”

Among the concessions, Quassa proposed dropping:

• the extension of bilingual education deadlines, which would delay the implementation of Inuktut instruction in grades 4 through 9 until 2030, as laid out in section 28 of the bill;

• the authority given to the education minister to make decisions on the language of instruction, including the assignment by grade, program of study and course, as described in section 41;

• the responsibility for the oversight of inclusive education from District Education Authorities to school principal;

• the minister’s role in establishing a choice of standardized school calendars and the appointment of school’s principal and vice-principal; and

• the requirement for DEA Councils to report annually on the use of its funding, operations and activities.

A full breakdown of those concessions are listed in Appendix 1 of Quassa’s letter.

“…The urgent need to review and improve the Education Act within the life of this government was identified as a top priority in Sivumut Abluqta, as well as the 2015 report of the Special Committee to Review the Education Act,” Quassa wrote.

“To this end, my hope is that by removing contentious clauses, sub-clauses and paragraphs of Bill 37, we can still move forward to make other positive improvements.”

But Sammurtok said there was no time for proper consideration.

“In order for us to support those concessions, we’d have to go back to the public for their thoughts and there was really no time for us to do that,” Sammurtok said.

“If we’d agreed on a debate, we would have been seen as not fulfilling on our commitment.”

When asked if the committee could have worked with Quassa’s concessions if given more time, Sammurtok said the question was “redundant.”

“It will now be up to the next assembly,” he said.