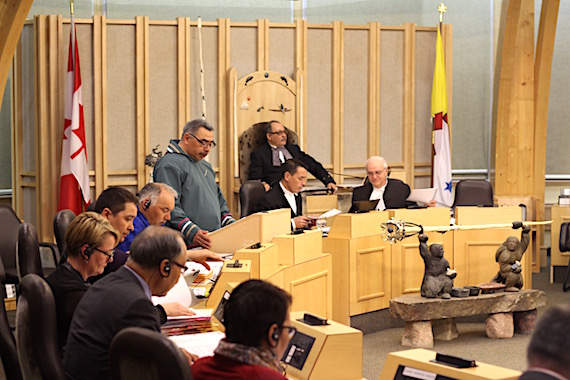 Nunavut Finance Minister David Akeeagok stands up in the legislature May 28 to deliver his budget address for the 2018-2019 fiscal year. Afterwards, MLAs were ready with their questions about how the Government of Nunavut plans to cut costs. (PHOTO BY BETH BROWN)

After Finance Minister David Akeeagok said in Tuesday’s budget address that the Government of Nunavut will look at ways to cut costs, MLAs in the Nunavut legislature were keen to know how this will be done.

During the legislature’s daily question period, following the budget address, they asked for more information about how the GN plans to determine where it might have some “tunnuq” or fat to trim from programs.

Their responses to the budget address came after Akeeagok said he is ready to look at how to reduce costs to deal with the 2018-19’s projected fiscal deficit of $54 million.

“It’s not a surprise to Nunavut. It’s something we need to do,” Akeeagok told Nunatsiaq News about the cost-cutting exercise.

He said people will still be upset, but the government has no choice but to do it.

However, it’s the details of that process that interest John Main, MLA for Arviat North-Whale Cove.

During question period, he asked how the Finance Department intends to look at the government’s expenditures and determine “where we might have a bit of excess, or have a bit of tunnuq, to use a Nunavut term, a bit of fat to cut.”

“I’ll bring up a few examples,” Main said. “GN travel, which can, in some cases, be discretionary. The habit of March madness spending, where departments and divisions rush to get their budgets fully spent. Issues with procurement. And, of course, trade shows. ”

Last week in the legislature, Main had slammed the GN for spending more than $570,000 on the Northern Lights Conference and Trade Show, which took place earlier this year in Ottawa.

“In terms of the mechanism within the Department of Finance, what is being done to determine whether we are wasting money as a government?” Main asked Akeeogok. It was a theme also picked up by Iqaluit-Tasiluk MLA George Hickes, who also had questions for the finance minister.

Hickes said he wanted to know more about how the government will identify programs that are no longer effective.

In response, Akeegok said the GN has a process that’s called a three-year expenditure forecast.

“Through those expenditure forecasts, we call upon each department and a call letter goes out to every department” to see where they plan to spend money, he said.

Now that the 2018-19 budget has been tabled, each department’s minister will present their plans, which will be examined by the MLAs in the committee of the whole.

This takes place in the afternoon after question period and other regular business of the day at the legislature. You can watch the live proceedings online on the legislative assembly’s live stream from the chamber.