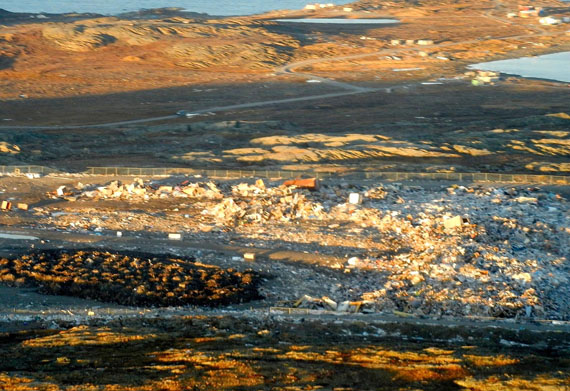 The Rankin Inlet dump. An APTN documentary broadcast Nov. 21 contains video showing some Rankin residents foraging for food there. Nunavut MP Leona Aglukkaq said she phoned the Rankin Inlet hamlet office because she was “troubled when I heard recent reports about families in Rankin Inlet struggling to find food.” But she categorically denies asking for an apology from the deputy mayor or Rankin Inlet and said allegations to that effect are false. (PHOTO BY JANE GEORGE)

In a story that keeps changing by the hour, Nunavut MP Leona Aglukkaq is denying allegations published by the Aboriginal Peoples Television Network that she called hamlet officials in Rankin Inlet to seek an apology from the deputy mayor.

In a statement posted on her Facebook page, Aglukkaq clarified, from her point of view, why she called the Rankin Inlet hamlet office regarding a Nov. 21 APTN Investigates report, entitled “Wasting Away,” which contained video showing some residents foraging for food at the Rankin Inlet dump.

According to a followup story by APTN, Aglukkaq is alleged to have contacted the hamlet office Nov. 26, and is alleged to have spoken to the senior administrative officer to say that Deputy Mayor Sam Tutanuak should apologize for statements he made within the “Wasting Away” report.

In “Wasting Away,” Tutanuak, overcome by emotion, talks about the suffering that food insecurity has produced in his community.

Tutanuak did not speak directly to Aglukkaq, but he told APTN on Nov. 27 that he would not apologize.

But Aglukkaq said she never sought that apology.

“The allegations made against me by the Deputy Mayor of Rankin Inlet in an article published by the Aboriginal People’s Television Network are completely false and must be corrected,” Aglukkaq wrote in her statement, released Nov. 28.

“I was troubled when I heard recent reports about families in Rankin Inlet struggling to find food, so I followed up with my constituents to address these concerns.

“I also contacted the Senior Administrative Officer in Rankin Inlet to learn more about these concerning reports. At no time, did I speak with the Deputy Mayor during this phone-call conversation. And at no time, did I or my office request an apology from anyone at the Hamlet.

“The Deputy Mayor’s claims about this conversation are completely false. I am currently reviewing all of my legal options,” Aglukkaq said in her statement.

The man at the centre of the controversy, Rankin Inlet SAO Tom Ng — the person who took the call from Aglukkaq — spoke briefly to Nunatsiaq News Nov. 28.

Ng, who’s only been on the job for three weeks, having just moved to Rankin from Cambridge Bay where he was financial director for three years, said politely that he was not prepared to disclose what was said.

“That was a private telephone conversation between me and minister Aglukkaq. I do not wish to comment on that,” said Ng. “If you want a response, I suggest you send me an email and I’ll forward it on to the mayor and he may want to respond. I’m new here. I just moved here a month ago.”

The “Wasting Away” report, which is 20 minutes long, describes how hungry Rankin Inlet residents regularly scavenge for food at the town dump — some of it perishable food discarded by local grocers who, presumably, used the Nutrition North subsidy to bring it north.

The story ran just days before the Auditor General of Canada released his fall performance report of Nutrition North in which he criticized the program for, among other things, its lack of internal scrutiny and transparency.

As a result of that audit, and APTN’s findings, NDP Leader Thomas Mulcair raised issues related to northern food security in the House of Commons during Question Period Nov. 26,

“Families in Rankin Inlet were foraging for food in the town dump. APTN reports that a lack of affordable food has some families in the north scavenging in landfills,” Mulcair said in the House of Commons.

“Does the Prime Minister not feel any shame that families in the North are getting their food in the town dump?”

According to NDP and Liberal members who attended question period that day, as Mulcair spoke, Aglukkaq heckled the NDP leader, yelling, “It’s not true.”

Those MPs were featured in an APTN followup story which is available on their website here.

“The member of parliament for that region is saying, ‘That’s not true.’ I don’t know whether she didn’t see APTN Investigates Friday night, but there’s footage that it’s clearly true,” Liberal MP Carolyn Bennett told APTN reporters after QP that day.

According to another followup report from APTN, Aglukkaq’s office allegedly sent a written statement in response to the broadcaster’s questions about the House of Commons heckling.

“With respect to the allegation from the NDP about the minister that you refer to: it is false,” APTN reported Aglukkaq as saying, quoting the minister’s alleged statement.

You can find an online video stream of the original report, “Wasting Away,” here.

NDP members rose in the House of Commons again today asking more questions with regard to food insecurity issues in Rankin Inlet, according to a Nov. 28 news release. The release said Aglukkaq was not in the House to answer them.