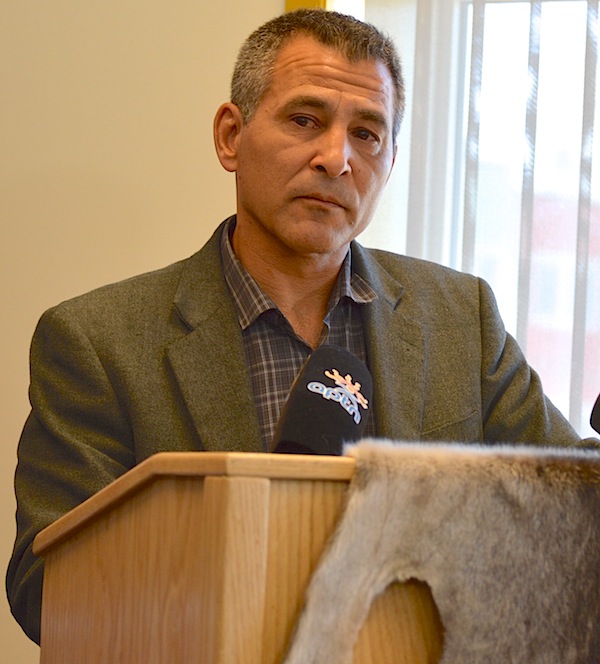 Nunavut MP Hunter Tootoo speaks July 27 to a gathering in his constituency office in Iqaluit — his first public appearance since resigning as minister in the Liberal government and leaving the Liberal caucus.

In his first public remarks since completing addictions treatment, Nunavut MP Hunter Tootoo said his first priority is to regain the trust of constituents.

Tootoo’s vow came 57 days after he stepped down as minister for Fisheries, Oceans and the Canadian Coast Guard and exited the Liberal caucus to seek treatment for alcohol addiction.

“I have work to do to regain their trust and respect,” he told attendees at a July 27 open house in his Iqaluit constituency office in front of an audience of about 10 people, in addition to members of the media.

However, Tootoo continues to be dogged by questions concerning Trudeau’s refusal to allow him back in to the Liberal caucus.

A story published early in the morning of July 28 by the Globe and Mail cites unnamed sources who allege Tootoo was involved in an inappropriate relationship with a junior female staff member and that Trudeau’s staff learned of this in late May and became alarmed.

The Globe and Mail also reported that, to protect the woman from being identified, Trudeau does not wish to discuss the situation.

In the fall of 2014, Trudeau declared that he would take a zero tolerance approach to sexual misconduct within the Liberal caucus and expelled two Liberal MPs after two women MPs in the NDP caucus complained of sexual harassment.

The two MPs, Massimo Pacetti and Scott Andrew, finished out their terms as independents, but they did not seek re-election in the fall of 2015.

Tootoo’s executive assistant, Henry Wright, said July 28 that Tootoo has no more to say on the matter.

And when asked if the Globe and Mail story is based on just a rumour, Wright repeated the same line: “We have nothing to add whatsoever.”

Tootoo said July 27 he will continue representing Nunavut as an independent MP, but he said little about the current status of his relationship with the Liberal Party of Canada or Prime Minister Justin Trudeau.

“I haven’t talked to anybody. The focus has been on me personally and now reconnecting with my constituents and other stakeholders in Nunavut,” Tootoo said.

In responding to questions during the open house event, Tootoo was mainly solemn, smiling only a couple of times. Most answers to questions on controversial matters were similar, saying that he is “focusing on recovering.”

Tootoo will remain outside the Liberal caucus, the Prime Minister’s Office confirmed In a written statement to Nunatsiaq News, following Tootoo’s public statements,

“We wish Mr. Tootoo well as he resumes his parliamentary functions as MP for Nunavut. His status with regard to the Liberal caucus remains unchanged,” the PMO said.

At the July 27 open house Tootoo said his decision to leave the Liberal party and cabinet was entirely his own.

“It was completely my decision to leave cabinet and leave caucus. I knew I didn’t want to have any distractions other than to devote all my energy and focus on my healing and getting better,” he said.

Trudeau told national media June 1 he would not comment further on the matter except to say it was “a difficult situation” that triggered Tootoo’s voluntary resignation.

Tootoo did not elaborate further.

“I know there’s a lot of rumours out there and the fact of the matter is I came to the realization that the disease of alcoholism, as a progressive disease, was affecting me in a way that I myself wasn’t happy with and I realized that I needed to do something and I needed help,” Tootoo said.

Tootoo said he is “much stronger now” after seeking treatment and is committed to continuing his recovery by attending Alcoholics Anonymous meetings.

Tootoo would not comment on where he received treatment, saying only it was “at a facility in southern Canada.”

“I developed a recovery plan. I have support people set up in place,” he said.

“This is not the first time I’ve stopped drinking. There have been times I’ve gone up to 13 years without drinking and I always went back to it,” Tootoo said, adding that he never dealt with the emotional trauma that lead him to alcohol as a coping mechanism.

Tootoo said he remains a strong supporter of the Liberal government and Prime Minister and will continue to hold them accountable for promises on the campaign trail last year.

“I have full confidence that they are going to follow through with those commitments and I’ll be there to ensure that they do, as well as raise any issues and concerns that Nunavummiut have in relation to that,” he said.

An accomplished territorial MLA, Tootoo rode the Liberal wave during the federal election last October, receiving 47.5 per cent of the popular vote in the Nunavut riding and defeating incumbent Conservative opponent Leona Aglukkaq.

Tootoo was then sworn in as minister for Fisheries and Oceans and the Canadian Coast Guard in Ottawa Nov. 4 — one of two Aboriginal ministers in Trudeau’s cabinet.