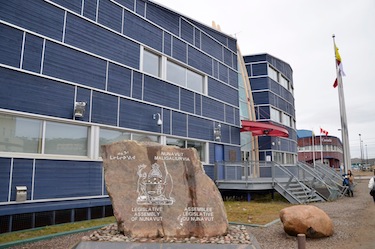 The next session of the Nunavut Legislative Assembly will see many new MLAs, as several MLAs announce they will not run for re-election Oct. 28. (FILE PHOTO)

The final day of the third Nunavut legislative assembly turned into a roll call for who’s running and who’s not running in Nunavut’s Oct. 28 territorial election.

MLA for Rankin Inlet North Tagak Curley, who often says he helped broker the 1993 Nunavut Land Claims Agreement to create the territory, announced he is stepping back from territorial politics.

Awarded the Aboriginal Lifetime Achievement Award in 1998 and invested into the Order of Canada in 2003, Curley is considered by some a “father of confederation in Canada.”

Speaking Inuktitut for almost all of his member’s statement Sept. 17, Curley reflected on his time in the position and thanked his constituents in Rankin Inlet.

After serving as an MLA for Keewatin South and Aivillik in the Northwest Territories from 1979 to 1987, Curley ran unopposed in the Rankin Inlet North constituency in Nunavut’s 2004 and 2008 general elections.

“While I have some energy, strength to think, work and stand, I ask my constituents of Rankin Inlet to allow me to stay closer to my family, to our grandchildren, our daughters, our sons,” Curley said through an interpreter.

Curley said that he will be “resting for a while” after his tenure is complete.

Cabinet minister James Arreak also told the assembly he will not seek another term as MLA for Uqqurmiut in a member’s speech.

Speaking in Inuktitut, Arreak thanked his staff and members of the house, as well as his constituents.

Tapardjuk, closing out his second term as MLA for Amittuq, joked in the assembly about it being better as a regular member asking questions than a cabinet member. He started his terms in 2004 and 2008 in cabinet, and said “MLAs made me work hard.”

And Baker Lake MLA Moses Aupaluktuq also announced Sept. 16 that he is not running.

Daniel Shewchuk, MLA for Arviat for the past five years, announced his decision not to run again Sept. 13.

Those who have said they will run in the election include:

Hunter Tootoo, the outgoing speaker and MLA for Iqaluit Centre, said that at the “appropriate time, which will be Sept. 27, upon the close of nominations, my decision will be made public.”

Tootoo said during his member’s statement that during this assembly that “more than 110 formal motions have been introduced and considered and over 700 documents have been tabled for the benefit of the permanent public record.”

Other members who have not made a definite statement about their intentions include: