“He wanted everyone to see the video” 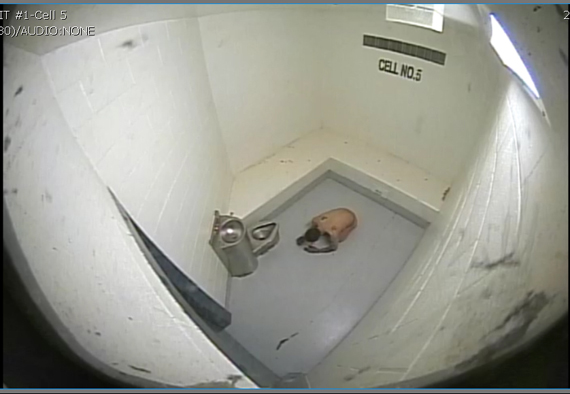 After RCMP officers leave Ejetsiak’s cell Jan. 2, video footage provided to Nunatsiaq News shows the man lying hunched over his knees in a fetal position on the cell floor, with a pool of blood collecting beneath his face.

Eetooloo Ejetsiak, the Iqaluit man depicted in cell-block security footage being manhandled by Iqaluit RCMP members, has waived his right to privacy so the video can be made public.

The video — which had been entered into evidence in open court on Feb. 12 — was initially banned from publication because of restrictions placed upon it by the Nunavut Court of Justice.

“The public has a right to see what goes in as evidence and closed-door courts is not what our system runs on,” said Mark Mossey, executive director of Maliiganik Tukisiiniakvik, Baffin’s legal aid society, which represented Ejetsiak at a recent sentencing hearing in Iqaluit.

Ejetsiak pleaded guilty to 14 out of 15 charges ranging from uttering threats to assault in proceedings which concluded Feb. 18 and garnered the troubled repeat offender a 36-month sentence in a federal penitentiary.

On Feb. 23, court records officer Clare Henderson at the Nunavut Court of Justice prevented the video from circulating in public because of “compelling privacy” interests of Ejetsiak.

“Given the contents of the exhibit… and the vulnerable nature of the citizen as depicted in the record, I must consider the compelling privacy interest that is present on the face of the materials,” Henderson wrote in a letter to Nunatsiaq News.

But when Ejetsiak’s defence lawyers at Maliiganik told their client about the restrictions, he disagreed with the court.

“We had one of our staff lawyers obtain instruction from Mr. Ejetsiak and he understood that he was naked and he had no concerns,” Mossey said Feb. 25. “He wanted everyone to see the video.”

Mossey then sought a leave on the restriction from the senior judge at the Nunavut Court of Justice.

In placing the restriction on the video, Henderson wrote that, in this instance, a citizen’s right to privacy trumped the court’s desire to adhere to the “open court principle,” to maintain “a presumption of open access.”

But Mossey, after consulting with Ejetsiak, said Maliiganik didn’t think a ban on publication was warranted in this case.

“We thought it was important that the video be released,” Mossey said.

The video in question, taken on Jan. 2, shows cell number five in the Iqaluit RCMP detachment.

At 8 p.m. — the fixed-point security video has a date and time stamp — Ejetsiak is thrown into the cell. He skids across the floor and stops just before his head hits the concrete benches that line two of the cell’s walls.

Four minutes later, when three RCMP officers enter the cell, Ejetsiak is sitting on one of the benches with his shirt wrapped around his neck.

The officers remove all of Ejetsiak’s clothing, one officer standing to the side with a taser gun pointed at the prisoner’s chest.

All three officers then move towards the cell door.

Ejetsiak stands up and very slowly moves towards the closest officer, the one holding the taser.

That officer appears to engage Ejetsiak in dialogue, but there is no audio so you can’t hear what, if anything, is said.

Ejetsiak continues to move slowly forward, and the officer with the taser shoves the prisoner in the chest. Ejetsiak then tries to kick that officer, but misses.

At this point the other two officers have already exited the cell.

The officer with the taser gun then grabs one of Ejetsiak’s wrists with his free hand, draws his other hand back — the hand holding the taser gun — and punches Ejetsiak in the face.

The prisoner falls backward onto the concrete bench. The other two officers re-enter the cell, but stay behind the officer who punched Ejetsiak.

The officer who threw the punch pulls the prisoner off the bench and onto the floor.

All three officers then back slowly out of the cell.

For the next 10 minutes of the video, Ejetsiak lies hunched over his knees in a fetal position on the cell floor, basically motionless, with a puddle of blood collecting beneath his face.

After the video was shown in court a week ago, Nunavut’s RCMP “V” division issued a news release saying they disagreed with how the video was depicted by Nunatsiaq News but announced they would nonetheless solicit an external review of the footage.

The RCMP announced Feb. 23 that the Ottawa Police Service would conduct that review. It’s unclear how long it will take place or whether a report will be made public.

Here are other excerpts from the video, broadcast Feb. 25 on APTN. 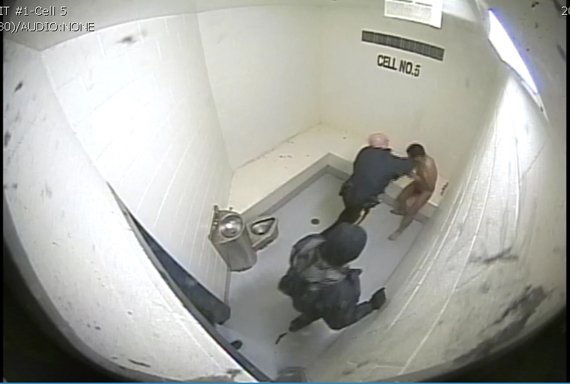 In video footage provided to Nunatsiaq News, this screen grab shows Iqaluit man Eetooloo Ejetsiak in an altercation with RCMP officers in an Iqaluit cell this past Jan. 2.