“We want something that’s going to work” 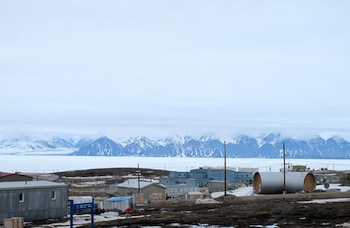 The Government of Nunavut plans to put in a new security system at the airport in Pond Inlet to stop any vandalism to aircraft there. (FILE PHOTO)

The Government of Nunavut plans to beef up airport security in Pond Inlet by installing new alarms and a camera with a “fish-eye” lens that can record a 360-degree view, said Shawn Maley, Nunavut’s director of airports.

This move comes in the wake of repeated incidents of break-ins and other vandalism to airplanes parked overnight at the Pond Inlet’s airport.

Among those incidents: last April, a Canadian North Dash-8 was parked overnight when someone broke the lock around the aircraft’s passenger door and caused other damage to the plane’s exterior. That incident cost the airline about $250,000.

Maley said he hopes to have the new security system in place by mid-January,

That will include new video cameras to monitor the ramp area where airplanes park and motion detectors and more robust entry alarms that will be switched on once the airport building is secured for the night.

“We didn’t feel video surveillance was the only tool that was required,” Maley said.

Because most airports are located out of town, vandals can break into airports and airplanes more easily and without notice.

But that’s not the only problem, Maley said.

Some inexpensive alarms haven’t been effective. These can triggered too easily, such as from the movement of wind blowing — and people also tend to remove them, Maley said.

A more reliable system needs to be put in place “that will keep people on their toes.”

Pond Inlet’s airport has been the site of three aircraft vandalism incidents this year, but “they are significant,” Maley said, adding that “one is too much.”

The cost of installing install the new system in Pond Inlet could cost as much as $30,000.

However, it is beneficial to have airplanes overnight in communities like Pond Inlet, because that means people can to fly to Ottawa in less than one day, he said.

If all goes well with the new security system, updated systems may also installed in four other Nunavut communities, Cape Dorset, Igloolik, Hall Beach and Arviat.

After that, communities in the rest of Nunavut may also see new security systems installed.

Although the impetus for the new security system is to prevent vandalism in aircrafts, airport buildings get broken into as well.

In Cape Dorset, there have been problems with break-ins to the airport building, Maley said.