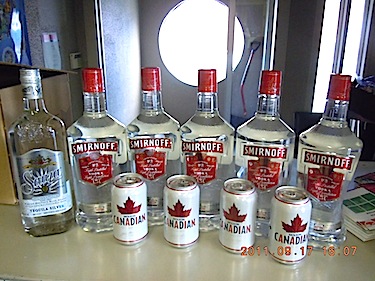 Here’s a look at some vodka, tequila and beer which didn’t make it into Pangnirtung — a community that’s officially dry — in 2011. Under a new Nunavut Liquor Act, the community could see prohibitions drop. (FILE PHOTO)

The Government of Nunavut says access to beer and wine should be liberalized in the territory.

That could include opening a GN-run beer and wine store and allowing sales from local Nunavut liquor commission warehouses.

These are among the changes the GN supports as the territory starts pulling away from the “current control system.”

The GN suggests that the current Liquor Act could be amended so that the GN could open one or two of the existing alcohol warehouses to local purchases of beer and wine — as a pilot project.

These are among the responses made by the GN to the recommendations from the “Halting the Harm” final report of the Nunavut Liquor Act Review Task Force.

Finance minister Keith Peterson tabled the document outlining the GN’s responses, with no fanfare or comment, in the legislative assembly, on March 19, the last day of the winter sitting.

The GN agrees that it should take steps to reduce the harm that the “inappropriate” use of alcohol causes in the territory.

But the GN doesn’t want to change the current system quickly, a system that includes dry communities where no one can order in alcohol, communities where drinkers can bring in alcohol with limits and a permit, and others where there are limits but still a requirement for a permit.

The GN says that some of the recommendations made by the task force “may have unintended consequences and should be implemented in a measured manner, if at all.”

All changes should be made “in a measured manner,” with a phased approach or pilot testing in communities.

The GN also rejects the idea of adopting restricted possession limits, saying these would “only create criminals where there are currently responsible users of liquor.” And those limits could impact on “wine connoisseurs, those with a properly stocked liquor cabinet or people who use liquor as ingredients for preparing meals.”

Tight possession limits could also encourage consumers to binge drink so they could buy more.

And the GN also nixes the idea of standardized freight charges for shipping alcohol to remote Nunavut communities because “if the cost of liquor in Iqaluit is increased to effectively subsidize the cost….the incentive to smuggle liquor into Iqaluit may increase.”

But the GN is favourable to adopting more and harsher penalties to deter bootleggers, as well as “civil forfeiture legislation” which would allow the GN to seize property as the proceeds and property of bootlegging.

However, GN said it’s no use trying to enforce liquor use out on the land, as the task force had suggested.

No direct comment was made on the task force’s suggestion for “mandatory reporting requirements for signs of alcohol abuse in the home,” although the GN said it would post health warnings on all its sold-in-Nunavut booze and respect the Access to Information and Protection and Privacy Act.

Among the GN’s other responses to the task force recommendations:

• Special orders like “an annual beer lift,” and purchasing from local warehouses could lead to the cancellation of import permits;

• Personal import rules should be reexamined, and “a maximum amount of liquor per order could be set in restricted communities to allow them to transition from an alcohol education committee system to a more open, yet still controlled system;”

• The drinking age of 19 should be maintained, with a possible interdiction list for people who are ineligible to make any purchases at the Nunavut Liquor Commission;

• There should be more guidance for plebiscites, community alcohol strategies, and more education on alcohol.

Any potential changes won’t occur until after a new Nunavut Liquor Act is drafted and passed by the Nunavut legislature, and that won’t happen until after the next territorial election in October.