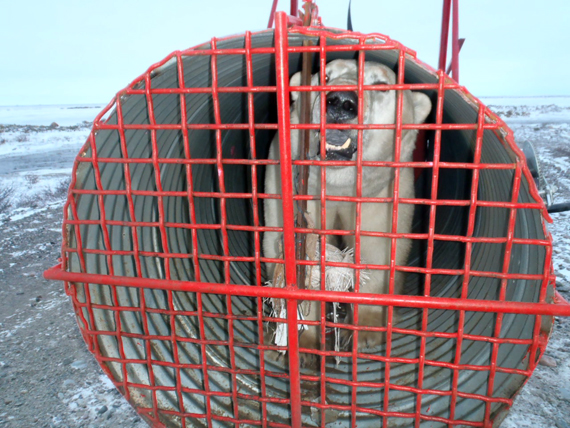 Wildlife officers capture a polar bear in this luring station outside of Arviat in 2014. Once captured, officers relocate the animal north of the community where it won’t be a threat to the human population. (FILE PHOTO)

As polar bear season winds down along Nunavut’s Hudson Bay coast, a program run by the Hamlet of Arviat and the World Wildlife Fund Canada has led to a dramatic decrease in polar bear defence-kills, the WWF says

Since 2010, WWF has helped fund a polar bear patrol program in the Kivalliq community, where a local monitor is paid to patrol Arviat’s streets at night through the fall and early winter, when the bears are migrating north.

Over the program’s five-year duration, WWF said the number of polar bear defence kills dropped from an average of eight per year before 2010 to an average of just one per year, the organization said in a Feb. 22 release.

That’s despite an increase in encounters between polar bears and people, the WWF said.

The increase is linked to decreasing sea ice coverage, which serves as an incentive for polar bears to spend more time on shore in the summer months, looking for alternative food sources.

“WWF is pleased to see that our ongoing partnership with the Hamlet of Arviat is continuing to pay off for both community members and the polar bears,” said WWF president and CEO David Miller in the Feb. 22 release.

“We are now working to share these successes with other northern communities to expand the program.”

This past patrol season, which ran from September to December 2015, saw 190 encounters with polar bears in Arviat. Two bears were killed after they were determined to be a threat to human life, WWF said.

Local wildlife workers have also set up “luring stations” outside the community: cylinders filled with water and meat frozen together, hoping nearby polar bears will focus their energy there.

Wildlife officers have also set up traps to relocate the bears north of the community.

Arviat residents have for years been asking the territorial government to raise its polar bear quota for the region to take into account the number of defence kills, which are subtracted from the community’s hunting quota.

The Nunavut Wildlife Management Board recommended the GN increase the western Hudson Bay polar bear sub-population quota from 24 to 38 bears.

But the GN quietly announced a new quota increase last fall of just four polar bears, from 24 to 28.

the WWF said polar bear-human interactions aren’t only on the rise in Nunavut — the organization has noted an increase in attacks on humans across the circumpolar world.

That’s why WWF also supports polar bear patrols in Greenland and in the Yamal and Chukotka regions of Russia.

The organization plans to host polar bear deterrence workshops for wildlife officers and other front-line workers in the Kivalliq region in March.