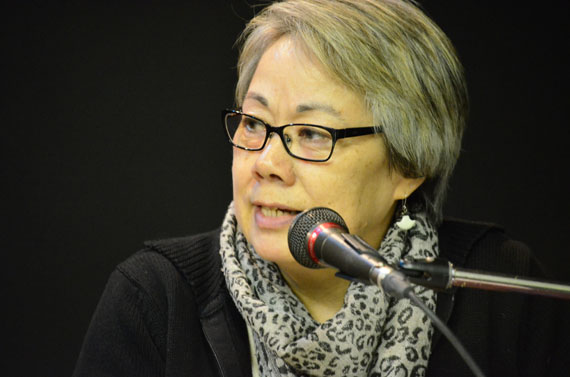 Eva Aariak, who went down to defeat Oct. 28, says she wants to continue serving Nunavummiut in a non-elected capacity. (PHOTO BY JIM BELL) 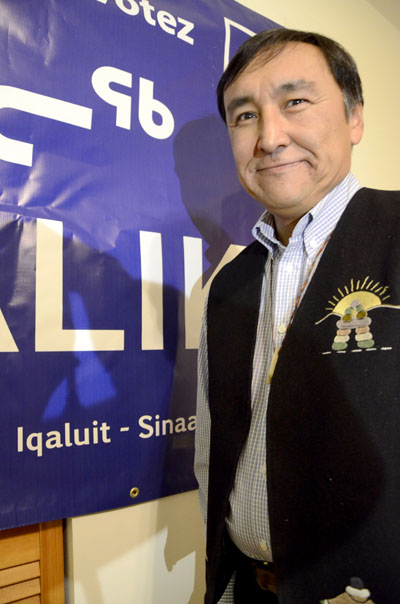 Former premier Paul Okalik shortly after he learned mid-evening Oct. 28 that he had won Iqaluit-Sinaa. (PHOTO BY DAVID MURPHY) 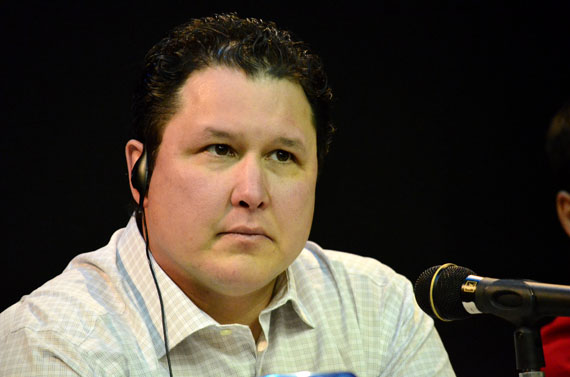 George Hickes Jr. pulled off an upset Oct. 28 when he defeated Eva Aariak in Iqaluit-Tasiluk. (PHOTO BY JIM BELL)

“I’m quite relieved and very happy for my wonderful volunteers that kept me going during the stretch and also want to thank my fellow running mates who gave a very good campaign,” Okalik told Nunatsiaq News.

Okalik took the seat with 183 votes, finishing well ahead of Leesee Papatsie, who took 97. Solomon Awa (69) and Natsiq Kango (42) finished well back. Voter turnout in the seat was only 50.3 per cent.

Okalik said he has not yet decided if he will contest the premier’s position.

“I’m not going to go there yet. I’m savouring the moment and I’m looking forward to working with all my colleagues in the new assembly,” Okalik said.

“I worked hard. I went door to door. And the good voters gave me a sense I was going to come out with a favourable outcome. So they told me at the door that their issues mattered and I listened and I look forward to represent each and every one of those good people,” he said.

“The people chose him, so I’m happy with the people’s choice,” she said.

“I’m happy because in some ways I feel like I planted a seed. I was telling people this is what you have and this is what the government should be doing,” Papatsie said.

At the same time, Hickes Jr., the cousin of Hunter Tootoo, the veteran MLA for the old Iqaluit Centre seat, has defeated Aariak and three others — Patterk Netser, Travis Cooper, and Gideonie Joamie — in Iqaluit-Tasiluk.

“I wasn’t going in giving my campaign spiel, I was going in and listening, and that’s what I’ve got to continue to do if I want to do an appropriate job,” he said. “That was part of my campaign promise to constituents.”

Aariak said she’s “disappointed” but at the same time, she congratulated Hickes on his victory.

“I think we both ran a very strong campaign. I would also like to thank my team that ran so hard. With elections, there can only be one winning. And I guess that’s how it is,” she said.

“I hope the next government will continue the good work this government has started. We concentrated a lot on long-term efforts rather than things that needed to be done during our term,” she said.

“I would like to thank my husband who was here with me. And for a month he didn’t go out hunting and he went out campaigning with me. He supported me 100 per cent. Went door to door with me,” Ell told Nunatsiaq News.

Ell said she thinks her emphasis on help for people with disabilities may have helped her campaign.

“We need to get more for the disabled and that all the things that we as a community want, things like the hospice facility perhaps, and also the arts centre. There’s just so much need here,” she said.

And in South Baffin, David Joanasie swept to victory with 409 votes, well ahead of second-place finisher Tommy Akavak, who took 160. Incumbent Fred Schell finished well back with only 43 votes.

“It’s amazing holy cow, my phone is ringing off the hook,” Joanasie said.

“I ran thinking I had a chance. The way I thought it was, I thought I would be a good choice for people to vote for. The numbers speak for themselves. It’s pretty humbling to see those numbers.”

Joanasie also said he will consult with his constituents before considering a run for a cabinet job when MLAs gather in Iqaluit to elect a government from among themselves.

In Arviat South, Joe Savikataaq won with 181 votes and in Pond Inlet, Joe Enook was easily re-elected as MLA for Tununiq.

Alan Rumbolt was re-elected in Hudson Bay, where 139 Sanikiluaq voters cast ballots for him.

“The first time around, five years ago, was different. I was new. I wasn’t an MLA. But when you’re trying to re-win your seat, there are different challenges out there,” he said from his home in Sanikiluaq.

“It’s pretty exciting. It was a fairly close race. I’m happy with how it turned out. I thought it might be a little closer.”

He thanked his family and all the voters of Sanikiluaq, even the ones who didn’t vote for him, saying he hoped to reunite the community and represent all his constituents.

“I’m just so excited. I just need my heart to settle down a bit now.”

Moses Appaqaq came in second in Hudson Bay with 97 votes, then Frank Audla with 63 and Lucy Uppik with 15.

Keith Peterson, the finance minister, won a big victory in Cambridge Bay, taking 443 votes, compared with 120 for Fred Pedersen and only 82 for Clara Evalik.

Two constituencies will likely be decided by judicial recount: Rankin Inlet South, where Lorne Kusugak and Alexander Sammurtok are tied with 172 votes each, and in Uqqummiut, where Niore Iqalukjuaq and Sam Nuqingaq are tied for first place with 187 votes each.

“I’ve been in elections for so long, you just have to prepare yourself for the worst and for the best. It’s not over yet,” Lorne Kusugak said from his Rankin Inlet home, where he was watching election coverage with his family.

Patrick Orr, the Elections Nunavut lawyer, said the returning officer must apply to the court for such a recount.

“The returning officer makes an application to the court, and the court appoints the time and place,” he said. “In this case, it should be within 10 days from the time the court receives the application,” Orr said.

An application is made any time there is a tie, or the difference between candidates is is less than two per cent, he said.

With files from David Murphy, Lisa Gregoire and Sarah Rogers.