“We’re not going to wait four, five or six years… for a final report” 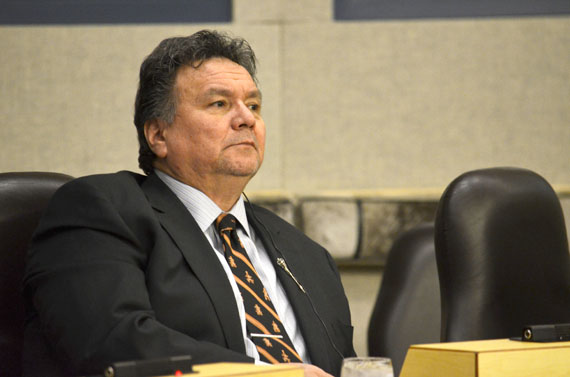 The Government of Nunavut supports the growing call for a national inquiry into missing and murdered indigenous women and girls, Premier Peter Taptuna said June 16 during a media teleconference.

The teleconference came at the end of the 13th annual Northern Premiers’ Forum, which Taptuna hosted in his hometown of Kugluktuk June 15 and June 16.

While Nunavut, as a territory, supports the various national aboriginal organizations who have been calling for a national inquiry, Taptuna said Nunavut’s needs are specific and unique.

“I’ve talked about our real need for addressing the domestic and family violence in Nunavut, which is 13 times higher than the national average,” Taptuna said.

His government’s mandate includes coming up with an action plan to address violence against Nunavut women and households, the premier added.

“We’re not going to wait four, five or six years… for a final report, if there is a final report from a national inquiry into missing and murdered Aboriginal women. We’ve taken the initiative to come up with action plans to try and address the situation that we face in Nunavut.”

Taptuna’s comments on the national inquiry differ markedly from what his minister responsible for the status of women, Jeannie Ugyuk, said in the legislature in Iqaluit this past March.

During the winter 2015 sitting of the assembly, Ugyuk said an inquest would “cost an exorbitant amount” and that “we are looking at ways to resolve our social issues through other avenues.”

“In Nunavut we aren’t searching for a multitude of missing women,” Ugyuk said at the time, without mentioning Nunavut women who leave the territory and go missing in some of Canada’s urban centres.

The GN is a latecomer to the list of supporters for a national inquiry, as was Nunavut Tunngavik Inc. who joined the chorus June 10.

Both the GN and NTI have expressed their support for the national inquiry after the release of the Truth and Reconciliation Commission’s final report earlier this month, which called on the federal government to launch an MMIW inquiry in one of its 94 recommendations.

Taptuna said during the June 16 teleconference that the TRC showed that residential school survivors and their families “continue to struggle with the legacy of this system.”

“We will continue to discuss this report and its recommendations over the next months with other premiers, aboriginal leaders and the [TRC] commissioner,” Taptuna said on behalf of himself, Yukon premier Darrell Pasloski and the premier of the Northwest Territories, Bob McLeod.

Next month, all of Canada’s premiers will meet in St. John’s, Nfld.