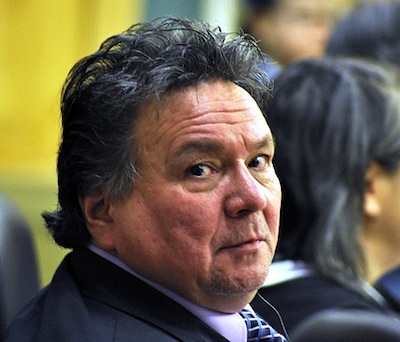 The chair of the Nunavut Planning Commission says he’s surprised and disappointed that the premier of Nunavut didn’t come to him first with concerns about a recent decision regarding Baffinland Iron Mines Corp., rather than going straight to the federal minister.

Hunter Tootoo said before the NPC made public its decision on Baffinland’s latest Mary River mine proposal on April 8, the NPC went to its planning partners, including Nunavut Premier Peter Taptuna and others, to explain the NPC decision and clarify any questions.

That decision said Baffinland’s proposed “Phase 2” plan, which includes increased iron ore shipping out of Milne Inlet by breaking ice in winter, does not conform to the North Baffin Regional Land Use Plan.

But Tootoo learned June 1 that Taptuna had sent a letter May 8 to Bernard Valcourt, the minister of Aboriginal Affairs and Northern Development Canada.

Tootoo said he first heard about it when the CBC ran a story about the leaked letter June 1.

“I believe there’s some misinformation in this letter and, also, I wasn’t even copied on it, which is disappointing,” Tootoo said early June 1.

Because Taptuna’s letter was not copied to the NPC, it forms no part of the commission’s public record, which includes all correspondence from interested parties on their website.

“I’m going to be contacting the premier’s office and asking to talk to him to clarify some of the misinformation he has, because I believe some of the comments he made in there are inaccurate,” Tootoo said.

In that letter, Taptuna says hesitancy from the NPC threatens jobs, wages and other future benefits for Nunavummiut.

The premier writes that he supports bypassing the land use plan and letting the Nunavut Impact Review Board examine the project, with an environmental assessment and public hearings — which echoes what Baffinland has requested.

“We are troubled that NPC is using the issue of core funding to avoid answering questions posed by the project proponent, thus limiting the ability of the proponent to take next steps to advance their project,” Taptuna wrote.

If funding is an issue, then the NPC should be audited to review their finances, he wrote.

When asked by reporters at the Nunavut legislature June 1 why he felt the need to intervene, Taptuna said several times that he respects the decision of the NPC, but it’s his job as premier to make sure people have jobs.

“The government’s mandate is the three E’s: education, economic development and employment. With our young population, we’re going to need over 800 jobs within four years and thousands of new jobs going into the future, ” he said.

“And with this, whether you call it politicizing a project, it doesn’t really matter. That’s our job to ensure that our people find employment.”

When asked if he supported year-round shipping and ice-breaking in winter to do so, Taptuna said that development must be sustainable and respect the environment — but added again that Nunavut’s young population will soon need jobs, and lots of them.

“It can’t be the government doing the hiring. We’ve got to have development,” he said.

And, when asked whether this was a cabinet decision or his alone, Taptuna told reporters that “the letter I put out there is usually a government position. And of course, some members of the cabinet understand our situation here.”

Taptuna told reporters later he didn’t bother to copy Tootoo on the letter, or go to the NPC, because he didn’t want to appear to be interfering with the process.

But he defended his actions of getting involved by corresponding directly with Valcourt because of that very issue: money.

“The issue here is that the proponent made another request for an amendment. And that’s after the regulatory body of Nunavut Planning Commission got their 25 per cent increase in their core funding. And still, as you know, there’s various letters out there stating they’re still chronically under-funded to carry out their mandate,” Taptuna said.

Tootoo said the premier should well understand the NPC’s financial situation. Every year, Tootoo said, members of the NPC board put together a work plan of projects they need to assess, explain how much it will cost and get approval from Ottawa.

A land use amendment, such as the one Baffinland originally requested, would take time and resources away from that approved work plan and simply could not be accommodated in this fiscal year without bumping other projects out or getting more money.

Tootoo also said all NPC rules and protocols, along with other institutions of public government such as the Nunavut Water Board, are all contained in the Nunavut Land Claims Agreement.

“All of us are there to ensure that the land claims agreement is followed,” Tootoo said. “It’s set up like that so that they are independent, third-party bodies.”

Land claims negotiators wrote the rules purposefully to, “eliminate the possibility of any political direction, one way or another, with any part of the process,” Tootoo added.

with files from David Murphy