Nunavut regulates fireworks, but municipalities deal with the noise: GN

“Our concern would be fire and injury from them, not the noise” 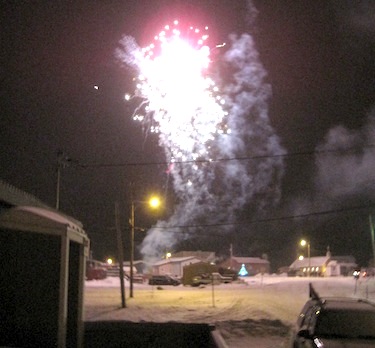 You can buy fireworks in Nunavut and use them — but your community may decide to ban or control their use in town.

That’s the latest from Ed Zebedee, director of protection services for the Government of Nunavut.

Fireworks sales in Nunavut are regulated by the territory, he said, but municipalities are left to handle noise control and where fireworks can be let off.

“Our concern would be fire and injury from them, not the noise,” he said.

Once fireworks are allowed in a province or territory, their use and where they can be used becomes a municipal issue, he said.

Except for special occasions, such as New Year’s Eve, many Canadian municipalities don’t allow fireworks to be set off close to town, Zebedee said.

Iqaluit city councillors said earlier this week that they are fed up with fireworks disturbances in Iqaluit during so-called quiet hours when people are trying to sleep.

To sell fireworks in Nunavut, retailers need a license, proof of age and the full name of the person buying them. They can’t sell to anyone under 18, and must keep a list of who is buying fireworks.

Retailers then have to provide a copy of the fireworks safety guidelines to the buyer.

The fireworks being sold must of a recreational class, not the kind require the handling of a skilled pyrotechnics person.

The fireworks you see in Iqaluit are of the recreational variety, which are sold across Canada, he said.

Nunavut retailers also must comply with regulations about storage, such as the size of cabinets they store the fireworks in and how many may be stored at one time.

Canadian guidelines are quite different, depending on the jurisdiction, Zebedee said, but in Nunavut, they are modeled after national fire guidelines.

That’s because prior to Nunavut’s creation in 1999 there was nothing in place.

And it was only three or four years ago that retailers started wanting to sell fireworks. At that point, “nobody had dealt with it in a legislative form,” Zebedee said.

A Nunavut guide has since been published and given out to retailers selling fireworks. This guide outlines proper procedure, and “common sense” things such as staying away from power lines, not setting them off on windy days, locking them away from children, and using sand pots to set them off — not your hands.

This is to “keep people and structures safe” because “there have been incidents where they’ve misfired,” Zebedee said.

But he hasn’t heard any reports of injuries or fires due to fireworks being set off in the territory, although fireworks are dangerous enough to cause injury.

“That’s why municipalities have come out with specific bylaws for fireworks,” Zebedee said.