“It’s kinda hard for me to find the words” 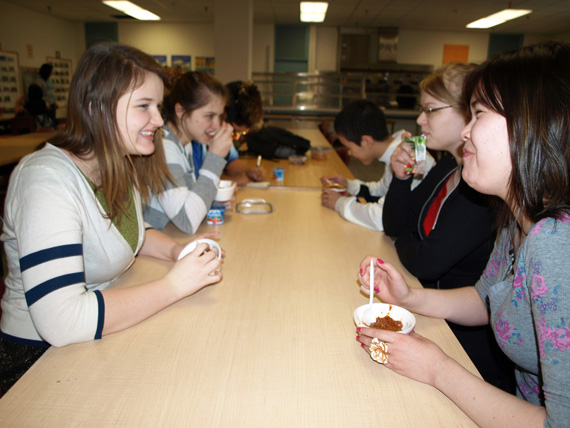 Parents in Nunavut want to talk to their children about sexual health and relationships, but they say they first need some emotional support themselves.

To encourage better family dialogue on sexual health and relationships, Nunavut-based research has identified the need to help parents heal from past trauma, while repairing the relationship between youth and elders.

She wanted to see if and how those perspectives lent themselves to the territory’s high rate of sexually-transmitted infections and teenage pregnancy.

Healey explored the shift in discussion around family relations and sexuality: something that once took place solely within the Inuit family unit is now shared through the school system and medical community, she said.

For the study, Healey, a PhD candidate in public health, and director of the Qaujigiartiit Health Research Centre, interviewed Inuit in three Nunavut communities.

More than three-quarters of those interviews were with women, and when asked where they learned about sexual health, most mothers in the study disclosed being sexually abused as children or adolescents.

And that experience made them feel unable to talk about sexual health with their own children, women said.

“It’s kinda hard for me to find the words,” one parent told Healey.

Mothers and fathers alike suggested bringing elders and youth together to talk about sexual health. Parents said they highly valued elders for their knowledge of family relationships.

Healey referred to older interviews conducted with the late Pond Inlet elder Painngut (Annie) Peterloosie, who highlighted the importance of the openness of relationship dialogue between romantic partners in discussing issues like menstruation, sex or sexual satisfaction.

But with residential school and settlement into communities, Inuit families were separated and displaced, Healey’s paper said.

Parents interviewed in this study were among the first generation of Inuit born into permanent settlements, and reported experiencing trauma, poverty and hardship in their childhood during this period of transition.

So while parents want to have an open dialogue with their children about sexual health, Healey found a strong need for emotional support to do this given the trauma they’ve experienced.

The study’s findings can offer direction to public health programs and services in Nunavut, Healey said.

“Healing and counselling services must be made available to families as part of this process, given the significant role child sexual abuse played in the lives of parents in this study,” the study concluded.

In Nunavut, the territorial government’s Sexual Health Framework for Action, for 2012 to 2017, was drafted to build on its sexual health services.

The plan is geared to respond to Nunavut youth, who say they want more information about sexual abuse, sexually transmitted infections, pregnancy and contraception.

It cites health statistics for the territory: in Nunavut, the teen pregnancy rate for young women aged 14 and 19 is more than five times the national average.

Among women, 52 per cent reported “severe sexual abuse during childhood,” while the figure was about 22 per cent for men.

It also noted that children in Nunavut under 18 are 10 times more likely than their Canadian peers “to experience sexual violations.”

The territory also struggles with sexual transmitted infection rates; the rate of gonorrhea, for example, is more than 50 times the national average, while health officials deal with a recent syphilis outbreak.

In a separate study, a health researcher from the University of Bergen (Norway) is currently gauging the sexual health needs of Arviat youth.