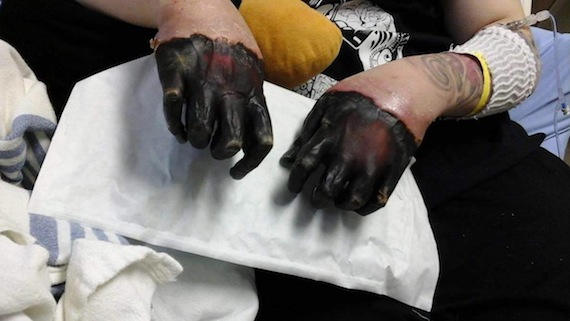 Romeo Tucci shows what his black, frostbitten hands look like March 27, in a photo shared with Nunatsiaq News by his sister, Christina Tucci. (PHOTO COURTESY OF C. TUCCI) 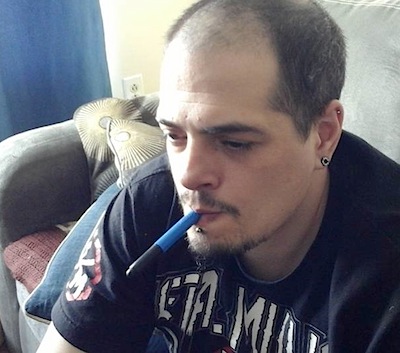 Romeo Tucci’s Facebook page shows him with a pen in his mouth — to demonstrate how he manages to type, without the use of his injured hands. 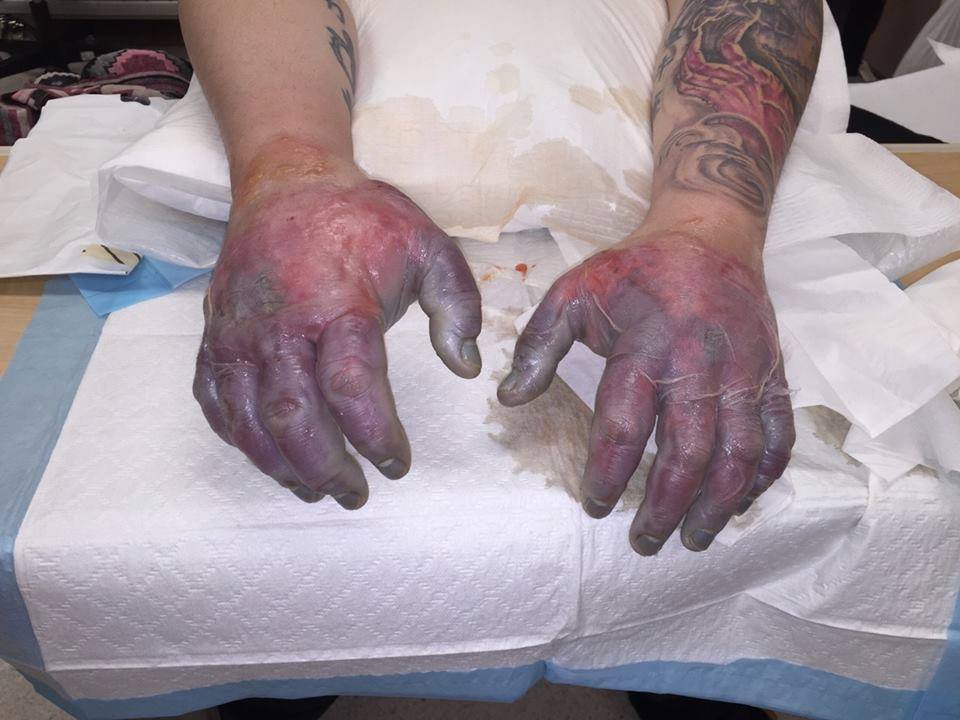 This how Romeo Tucci’s hands looked when he first arrived at the health centre in Cambridge Bay. (PHOTO COURTESY OF C. TUCCI)

A man in the western Nunavut community of Cambridge Bay has lost a fight to save his hands from amputation after he got lost in a whiteout earlier this month and suffered severe frostbite.

Tucci, 37, who typed his message with a pen in his mouth, said he is in “a lot of pain” due to the severe frostbite.

A trained chef who’s lived in Cambridge Bay for four years, Tucci said he’s now looking at a future where realizing his dreams of being a chef, among other things, will be much more difficult.

“That is not gonna happen anymore unless i can get thosrbrobotic hanďs only problem is that they cost $50,000,” he wrote on Easter Sunday.

This was before he learned on March 29 that surgeons would amputate his hands April 5.

To help out, his sister Christina has helped him put up a Go Fund Me page to raise money for Tucci’s expenses — and, now, rehabilitation.

Three weeks ago, Tucci, who had been working as a facility operator at the Hamlet of Cambridge Bay since last September, was lost for more than six hours in sub-zero temperatures near Cambridge Bay.

As he stumbled around in what became a whiteout, Tucci couldn’t see anything in front of him, his sister, Christina, wrote on gofundme.com.

Her brother fell into a ravine where he hit his head and became disoriented, Christina said.

The RCMP said police couldn’t mount a search for him as he had not been gone for more than 24 hours, she said.

A search party of family and friends was about to go out and look for him when Tucci “miraculously came stumbling up the road.”

At the Kitikmeot Health Centre, Tucci learned he had suffered severe frostbite to 95 per cent of his hands.

Frostbite is an injury caused by freezing of the skin and underlying tissues.

First, your skin becomes very cold and red, then numb, hard and pale. Frostbite can also occur on skin covered by gloves or other clothing — and Tucci was wearing gloves when he was lost.

Severe frostbite, like that of Tucci, requires medical attention because it can damage skin, tissues, muscle and bones as well as lead to infection and nerve damage.

Surgeons have no choice sometimes but to amputate an affected limb — or, as in Tucci’s case, both his hands, which are now black and withered, caused by the death and decomposition of the tissue.

Despite the severity of his frostbite, Tucci remained in Cambridge Bay for nearly three weeks before he was medevaced out of the community March 24 — a move that community sources told Nunatsiaq News was long overdue.

“I got lost for 6 hours on the land in a white out and my cell died was ĺùcky that I found my way back to town both my hands froze sòliď im scared cause they r gonna cut off all my finger tips,” Tucci wrote on his Facebook timeline March 22, when he was still in Cambridge Bay, hoping to raise $4,500 to leave for more medical care in the South.

Asked why Tucci remained in Cambridge Bay for so long before heading to Edmonton, his sister told Nunatsiaq News March 28 that the doctor in Cambridge Bay was in contact with the hospital in Edmonton. There, specialists said they would need to wait before deciding the extent of the damage to Tucci’s hands.

But Christina Tucci said she doesn’t understand why her brother was sent home initially with only Tylenol 3 to stave off the pain.

“We do believe he should of been sent sooner [south] more so for the amount of pain he was in,” she said.

Her brother then received morphine — but even that didn’t work, she said. Now, he’s receiving intravenous painkillers, along with a pain-killing patch and anxiety-reducing medications.

Had he arrived earlier in Edmonton for evaluation, maybe his hands could have been saved, Christina said.

On March 25, shortly after Tucci first arrived in Edmonton, it looked as if his hands might not have to be amputated: Christina said that doctors had decided to wait a couple of days before doing any surgery.

But the healing that needs to occur still in some of the remaining healthy tissue didn’t take place. Her brother is scheduled to undergo surgery later this week, which will result in the amputation of both his hands at the wrist, Christina said.

He and his fiancée, Yvonne Marie Angohiatok, who comes from Cambridge Bay, are “overwhelmed.”

“They’ll never be able to go back to Cambridge Bay,” Christina said.

Romeo Tucci’s Easter online conversation with Nunatsiaq News was cut short due to his pain and fatigue: “immavgo rest now,” he typed with his pen in his mouth.

Money raised will help cover expenses, such of those of Angohiatok who remains with him: She now pays $25 a night for a stand-by accommodation in an out-patient residence, which means she must carry everything out of her room to his hospital room each day, Christina said.

You can see a list of the 69 active Nunavut gofundme.com campaigns here.