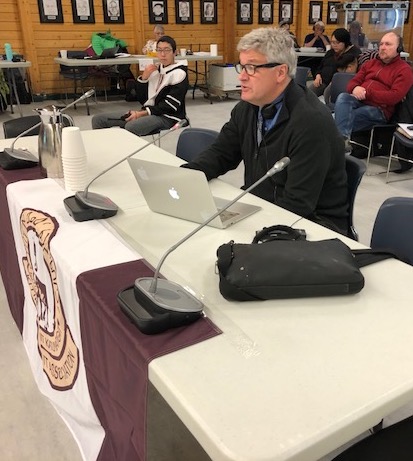 Scott Northey, the chief operating officer of the Nunavut Resource Corp., gives an update on the organization’s activities on Oct. 18 at the Kitikmeot Inuit Association’s annual general meeting in Cambridge Bay. (PHOTO BY JANE GEORGE)

In a revised handout of the NRC’s report to the meeting’s delegates from around western Nunavut, no mention was made of the $300,000 that computer hackers stole from the KIA-owned organization, except to say that the NRC is “very much in a period of transition seeking to take the next big step in both of its businesses.”

These big steps depend on new outside money to develop NRC’s mineral properties, now mired in an ownership dispute with Transition Metals Corp., and to get its Grays Bay Port and Road Project “shovel-ready.”

To make Grays Bay eligible for federal infrastructure money in three years, the NRC needs $29 million, which it hopes to get from Nunavut Tunngavik Inc., the Government of Nunavut and federal sources.

The NRC also wants to complete the environmental assessment process over the next 18 to 24 months, Northey said.

To get “shovel-ready,” they will need $21.75 million from the National Trade Corridors Fund and $7.25 million from various organizations, but “nothing is forthcoming yet,” Northey said.

The KIA plans to ask NTI during its upcoming annual meeting in Iqaluit to support a request for money, first introduced by KIA President Stanley Anablak in August at a NTI board meeting.

Promoters had wanted the Government of Nunavut to commit $138 million to the $500-million-plus project, but last March the GN decided not to spend any more money on the project other than the $2 million given last June to help the project’s development.

Echoing some of what Anablak said earlier this week in his report to the AGM, Northey said the NRC and KIA will meet Oct. 26 with the full caucus of the Nunavut legislature to gain more support for the project.

“The door is open a little bit,” Northey said.

Following the GN’s decision earlier this year to limit its support of the project, the territorial government ended a contract with Nunami Stantec to project-manage the process, reduced access to funding for NRC’s day-to-day operations and halted its advocacy of the project in Ottawa, he said.

Meanwhile, a resolution from the Canadian Chamber of Commerce is urging the federal government to support Grays Bay, Northey said. That will be part of the chamber’s efforts for the next three years, he said.

The cost of the project appears to now stand at roughly $555 million.

While the National Trade Corridors Fund help could cover pre-construction costs, the NRC is looking for major projects to move head or even a one-time contribution for the full cost of construction.