“We have no ill will towards it,” minister says 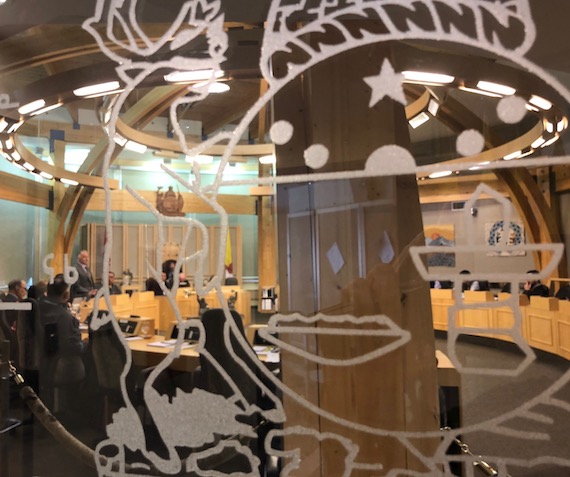 Economic Development Minister Joe Savikataaq stands up June 6 in the Nunavut legislature, where, once again, he made it clear that the Government of Nunavut will only support the Grays Bay Road and Port project “in principle.” (PHOTO BY JANE GEORGE)

The Government of Nunavut appears to have no inclination to embrace the Grays Bay Road and Port Project again or to offer the Kitikmeot Inuit Association’s proposal more than lukewarm support “in principle.”

On Wednesday, June 5, the debate around the GN’s decision to pull out of the big infrastructure project—which saw the KIA criticizing the GN earlier this week—continued in the Nunavut legislature, this time during an exchange of questions between Joe Savikataaq, Nunavut’s minister of economic development and transportation, and Gjoa Haven MLA Tony Akoak.

Savikataaq made it clear the GN does not intend to get involved with the Grays Bay project, which the KIA had hoped the new territorial government, elected last October, would continue to support.

Nunavut’s former premier, Peter Taptuna, and finance minister, Keith Peterson, who are both from western Nunavut, did not run in last fall’s election.

Promoters had wanted the GN to commit $138 million to the $500 million project, but in March the GN decided not to out any more money to the project than the $2 million given last June to help the project’s development.

“We have no ill will towards it,” Savikataaq said about the Grays Bay project.

Akoak asked Savikataaq why the GN wouldn’t put money in the project to help leverage more money from third parties—which might mean the GN’s $138 million wouldn’t even need to be used, the MLA suggested.

But Savikataaq said any financial commitment to Grays Bay, like others made by the GN, would have added to the debt load of the government.

“The way the accounting process works, the total cost of the long-term leases on anything that we have is added to the debt cap. It’s our accounting procedure and it’s accepted. So our share of the project of the $550 million would still have added to our debt cap of the $138 million,” he said.

That could impact of the government’s ability to, for example, pay for the rebuilding of a new school, if required.

“Any projects we do, any long-term leases, any money that we use, if we don’t have the money right in hand, it goes to our debt cap and there is a limit to our debt cap,” Savikataaq said.

“If we reach our debt cap, we will not have the ability to finance projects that are needed. If a school burns down again, God forbid, we would have to come up with money. If we have to build a health centre in a community, if we have to build another school, all these projects affect the debt cap. I’m sorry that the member doesn’t want to hear this, but it was submitted before or if it’s resubmitted, it will go to the GN’s debt cap.

Akoak also wanted to know if the GN would meet with the KIA, but Savikataaq’s answer looked like a no.

“I’m not unwilling to meet, but in terms of what we decided, we’re here to listen,” he told Akoak.

The KIA said it still plans to forge ahead with the $500-million project, despite the GN’s decision to back away from the proposal, and the federal government’s rejection of a bid for funding under the federal transportation corridors program.

On Thursday, the GN’s position, still unchanged, came up again for discussion—this time Premier Paul Quassa said if representatives of the Inuit organizations want to meet with his government, they can, but that the GN won’t partner on Grays Bay with them.