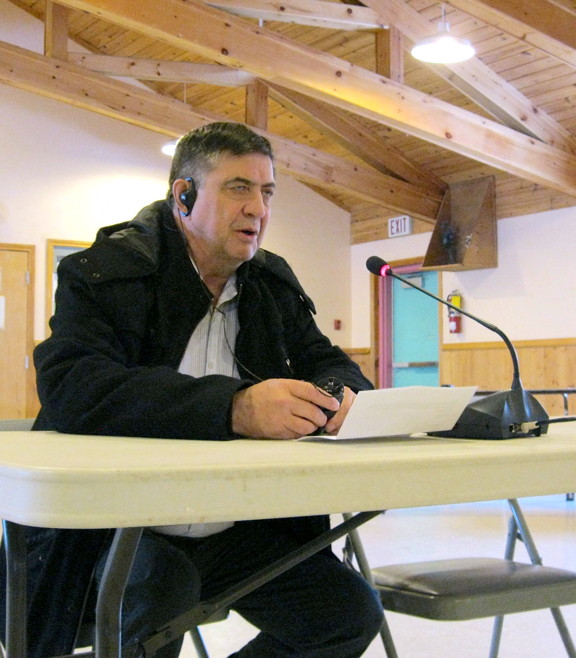 Ed Zebedee, director of protection services with the Government of Nunavut, describes his department’s efforts to improve search and rescue operations in the territory at the annual Baffin Mayors’ Forum in Iqaluit, March 4. (PHOTO BY PETER VARGA)

The territory’s waters are covered by no more than five Canadian Coast Guard vessels in the ice-free season and three volunteer auxiliary groups.

That doesn’t quite measure up for Nunavut’s 24 seaside communities, which are strung out along Canada’s longest coastlines, said Ed Zebedee, director of protection services for the territory.

And although federal tax refunds help search and rescue volunteers in their efforts, workers will need better transportation equipment to carry out their work on land and in the water, he said.

Zebedee and his small office are lobbying the federal government for added help on both counts, he told Baffin mayors March 4 at their annual forum in Iqaluit.

“We are in talks with the Canadian Coast Guard about getting coast guard auxiliaries into the communities of Nunavut,” Zebedee told Baffin mayors at the forum.

The Canadian Coast Guard Auxiliary is a non-profit organization dedicated to search and rescue, and water safety.

“I’m very concerned that we have 24 communities that are on the water, and yet we only have three auxiliaries in Nunavut,” Zebedee said.

The neighbouring Northwest Territories has just “two communities on the ocean, and they have 13 auxiliaries,” he said. “I’d like to change that.”

Adding auxiliary groups for Nunavut could open up access to boats and other seaworthy equipment that Nunavut rescuers lack, Zebedee said.

“When the Coast Guard has surplus boats, they would notify us about that and we would be able to purchase those boats,” he said.

But the office doesn’t cover vehicles, property and other “capital equipment.” Protection services, which is a section of Nunavut’s Community and Government Services department, is now seeking ways to help cover some of this for communities, Zebedee said.

“For more skidoos and things like that, we’re looking at a program where government equipment can become surplus,” he said. “Communities would get first priority, and wouldn’t have to pay for it. We’re looking into government processes to cover that.”

Baffin mayors at the forum favoured the efforts. Complaints about lack of equipment and the need for upgrades echoed throughout the meeting and in their questions to the director.

Zebedee said his office has called on senior administrative officers of all communities “to find out now what equipment needs to be replaced and what needs to be updated.”

“That information is critical,” he said, particularly now, as spring is the busiest time of year for searches.

Based on current information, Zebedee said it sounds as though almost all the equipment in Nunavut municipalities needs to be replaced. “We’re in the process of trying to do that now before spring comes and the searches kick in,” he said.

Nunavut Search and Rescue often calls on help from the air for the most difficult searches, and the Canadian Forces offer a quick response through their Joint Search and Rescue Coordination Centres, which operate out of four air bases across the country.

Zebedee says his department hopes to improve on response times from the air by setting up an aircraft station in the Arctic.

“We’re still talking with the federal government on that,” he said. “We’re hoping we can get aircraft stationed here over at least a six-week period, when we have most of our searches — which is in the spring.”