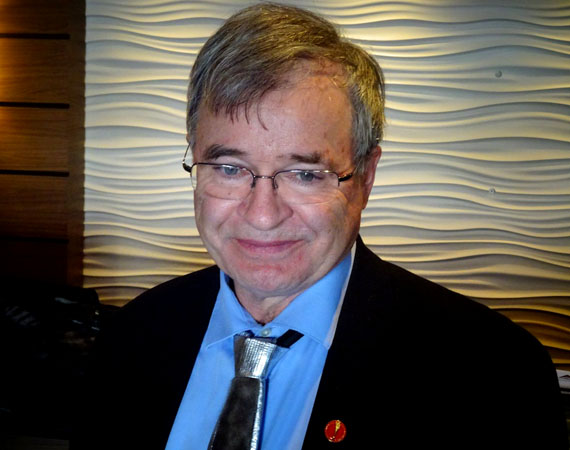 “I hope that this ruling will help ensure that Nunavut is given control of our offshore as devolution negotiations continue,” Patterson said Aug. 2.

Nunavut Senator Dennis Patterson says the recent Supreme Court of Canada ruling against a seismic testing project proposed for the waters off Baffin Island reaffirms Inuit rights to the offshore and bodes well for the territory’s devolution talks with Ottawa.

“I hope that this ruling will help ensure that Nunavut is given control of our offshore as devolution negotiations continue,” Patterson said in a statement released by his office Aug. 2.

“As a coastal people, [Inuit] should have a say in projects that occur in their offshore waters and target the rich resources there as their traditions, food sources, and livelihoods are all inextricably linked to the marine areas in question.”

On July 26, the SCC overturned a 2014 decision from the National Energy Board that authorized a five-year seismic testing project in Baffin Bay and Davis Strait that would search for potential oil and gas deposits.

The proposed seismic testing was to be conducted within Canada’s 200-mile offshore economic zone, but outside the Nunavut Settlement Area, which extends only as far Canada’s 12-mile territorial waters boundary.

Jerry Natanine, the former mayor of Clyde River, the Hamlet of Clyde River and the Nammautaq Hunters and Trappers Organization had gone to the Supreme Court to appeal a Federal Court of Appeal decision that upheld the NEB’s decision on Clyde River.

Patterson praised the conciliatory remarks that Natanine made in Ottawa after the SCC released its decision, when he said Inuit are still open to discussing the project, so long as they are given adequate consultation to make an inform decision.

“True reconciliation means giving Inuit the option to choose development if that is what they want to do,” Patterson said, citing comments from Clyde River’s lawyer, Nader Hassan, who said Inuit were not “anti-development” during hearings at the Supreme Court last winter.

New negotiations for Nunavut’s devolution were announced following the election of the Trudeau government in 2015 and the appointment of a new federal negotiator, Fred Caron.

The previous negotiations, which—along with the federal government—also include representatives from Nunavut Tunngavik Inc. and the Government of Nunavut, stalled when Ottawa refused to deviate from earlier devolution formulas granted to the Yukon and Northwest Territories.

Nunavut Premier Peter Taptuna said in April that he would like to have a devolution agreement-in-principle in place with Ottawa before his government’s term ends later this year.

Patterson has weighed into land development in Nunavut prior to the SCC ruling, coming out against protections against resource exploration contained in the Nunavut Planning Commission’s draft Nunavut Land Use plan.

Patterson is also critical of the moratorium on offshore gas and oil drilling enacted by the Trudeau government in 2016.