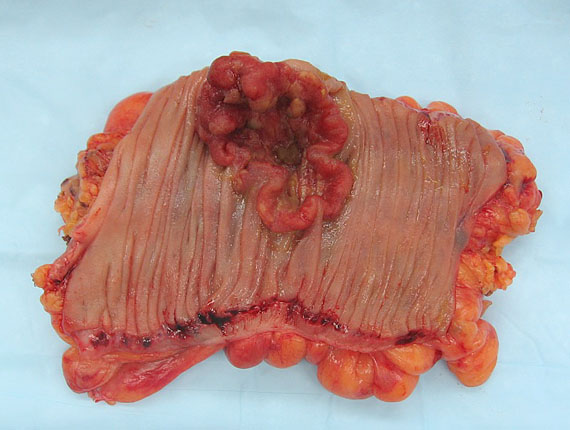 The inside of a colon showing an invasive colorectal carcinoma — the crater-like, reddish, irregularly shaped tumour. The GN plans to develop an early detection strategy for colorectal cancers. (WIKIPEDIA COMMONS PHOTO)

The Government of Nunavut seeks an expert to help develop a colorectal cancer screening program that that will lead to early diagnosis and treatment.

The cancer, which affects rectal and colon cells, remains the second most common cancer behind lung cancer in Nunavut: The territory’s death rate from the disease is four times the national average.

A request for proposals issued Nov. 27 on behalf of the GN’s department of Health asks calls for bids to provide “expert critique and research assistance” in the development of the screening program.

The expert will be required to work with the department to do background research, provide possible options, assemble a business case and consult in at least one community in each of Nunavut’s three regions.

The work is necessary because unlike most other Canadian jurisdictions, Nunavut currently has no organized colorectal cancer screening program, despite the fact that the disease accounted for 19 per cent of all cancer cases detected in the territory between 1999 and 2011.

The connection between early diagnosis and decreased deaths due to the illness is well-established.

The RFP documents do not indicate how much the government expects the program will cost.

Okalik noted that there is no effective screening for lung cancer.

Angnakak, who also said she was concerned about Nunavut’s overall cancer policy, pointed out that the Northwest Territories recently released its cancer strategy.

She asked “can the minister explain why, here in Nunavut, we don’t have a comprehensive cancer strategy and when we may expect one?”

Okalik replied that he hoped to come up with a strategy “in the near future.”