Nunavut to produce small surpluses this year and next, finance minister reports

“Our fiscal situation is reasonably stable” 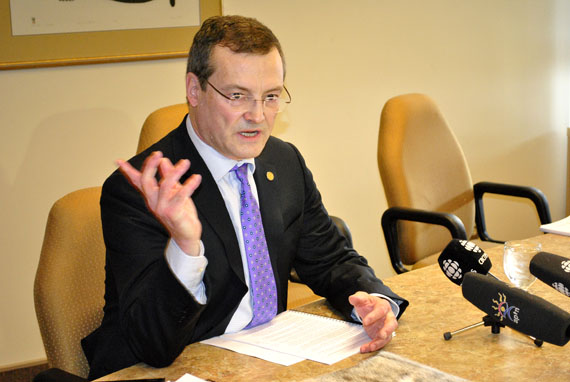 “Our fiscal situation is reasonably stable and I can report that the government projects a modest surplus for another fiscal year,” Nunavut Finance Minister Keith Peterson said in his Feb. 27 budget speech at the Nunavut legislative assembly. (PHOTO BY JIM BELL)

That’s because his 2013 budget address predicts the Government of Nunavut will produce a small budget surplus of $21.9 million by March 31, 2014.

And when accounts are completed for the current fiscal year, 2012-13, which ends this coming March 31, the Nunavut finance department expects the GN will show yet another surplus — of about $37 million.

Though this is the last budget to be tabled prior to the Oct. 28 territorial election this year, it contains no big vote-buying projects.

“It’s not a flashy budget. It’s straight forward. We’re continuing with what we promised in Tamapta. We didn’t come out and say we’re going to deliver a bunch of high profile projects. We said we would stick with the basics…,” Peterson told reporters.

The two small surpluses account for less than one per cent of GN spending and will be put towards building up the government’s cash reserves, GN finance officials said.

That works out to about $43,465 for every man, woman and child in Nunavut.

Background documents attached to the budget showed Nunavut’s overall unemployment rate stood at 15 per cent in 2012.

That’s double the national unemployment rate of 7.2 per cent.

The workplace participation rate — which means the proportion of people aged 15 to 65 who seek work — is 65.9 per cent, almost equal to the Canada-wide rate of 66.7 per cent.

“On the whole, working age Nunavummiut are as interested at finding a job in the wage economy as other Canadians,” a budget document said

“Median” means half of all Nunavut tax filers reported total income of less than $26,005.

And the Nunavut finance department calculates that median family income in Nunavut was $62,680 a year in 2010, compared with $69,860 for all of Canada.

At the same time, the contribution that the private sector is still limited, with government spending expected to account for about 60 per cent of the territory’s gross domestic product in 2013.

Peterson told reporters the GN is attempting to tackle poverty in Nunavut through several measures announced in his budget.

One is a $1.9 million GN contribution to am adult education program called Pathway for Adult Secondary School, or “PASS.”

Under it, adults can work towards the equivalent of a secondary school graduation diploma.

“There are a lot of jobs in government and the private sector can provide those jobs as well, and we will train the people for those jobs,” Peterson said.

He also said he’s “well aware that there are huge and great demands across Nunavut” that the government cannot meet.

“I only wish I had more funding to assist people. Everyone knows we require housing, two or three thousand houses. We can’t do that on our own,” Peterson said.

Mining, mostly represented by the Meadowbank gold mine, is expected to contribute about 19 per cent to the territory’s GDP.

In 2013-14, the GN expects to spend $1.679 billion, with the new stand-alone Department of Health budgeted at $288 million, more than any other single department.

The new Department of Family Services, which starts up this April 1 as a standalone entity, is projected to spend $112.974 million and be staffed by 174 people.

The Department of Education will likely spend $195.8 million, with a staff of 1,197 people.

Other highlights of Peterson’s budget speech include:

• a new formula for funding municipalities under which the Community Government department will spend $4.2 million more;

• an additional $8 million to the Department of Justice to improve policing;

• an extra $1.4 million to help pay for GN participation in the environmental assessement of mining projects;

• $5 million to help the territorial government meet its obligations under the GN’s language laws.