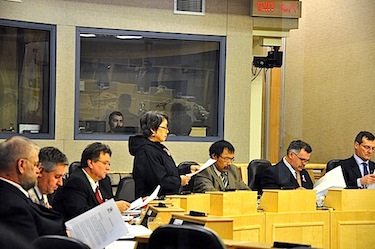 Nunavut premier Eva Aariak says the Government of Nunavut will suggest amendments to the Access to Information and Protection of Privacy Act by the end of 2012. (PHOTO BY SARAH ROGERS)

After completing a review of its Access to Information and Protection of Privacy Act, the Government of Nunavut now promises action.

The GN will deliver amendments to the act by the end of 2012 to ensure better “accountability and transparency,” Nunavut Premier Eva Aariak told the legislative assembly last week.

“Personal privacy concerns all information collected by the Government of Nunavut about an individual. This information is protected and there are clear guidelines on how it can be collected, used, and disclosed.”

Aariak’s announcement responds to the recent — and repeated — recommendation from Nunavut’s information and privacy commissioner.

In her 2010-11 annual report, tabled during a mini-session of the legislative assembly on Sept. 28, privacy commissioner Elaine Keenan Bengts seethed at the inaction that greeted her previous reports, which among other things, called upon the GN to extend access to information rules to municipalities.

“It is frustrating, to say the least, when year after year, these recommendations come to nothing,” Keenan Bengts wrote.

Keenan Bengts made a single recommendation, which she also made two years ago, that would give the commissioner’s office more power to enforce the Access to Information and Protection of Privacy Act.

Currently, the act doesn’t have any means of forcing the government to comply.

The only consequence for lack of compliance in the act is a maximum $5,000 fine for anyone who knowingly collects or uses personal information in a way that’s against the rules.

In her 2010-11 report, Keenan Bengts cited the case of a Nunavut man who filed a complaint with her office complaining that his former supervisor at a GN department or agency released information about the employee after he was fired.

The commissioner couldn’t find the exact source of the leak, but said government offices in small communities need to be especially careful in protecting sensitive information.

In past years, Keenan Bengts has also urged the GN to extend access to information rules to municipalities.

Aariak said the proposed amendments will bring the act up to national standards for the protection of personal privacy.

“The amendments will allow individuals the ability to complain to the Information and Privacy Commissioner if they feel that the Government of Nunavut has inappropriately collected, used, or disclosed their personal information,” she told MLAs.

Aariak said she planned to bring the amended act to cabinet for approval in 2012.