Nunavut tops spending on health care in the circumpolar world This April 26 plenary discussion on communities and health, part of the International Polar Year conference in Montreal, included speaker Lars Anders Baer, the former president of the Saami Parliament, Dr. Henning Sloth Pederson, the chief medical officer at Nuuk’s Queen Ingrid hospital (second from left) and Dr. Kue Young, a researcher in aboriginal health at the University of Toronto. (PHOTO BY JANE GEORGE)

A sizeable chunk of the money spent by Canada during International Polar Year — $10.6 million out of about $150 million — went to the 2007-08 Qanuippitali Inuit health survey in Nunavut.

“The Inuit health survey, which was one of the IPY projects has given us an understanding of the health of Canada’s Inuit and will help us measure changes in their health in the decades ahead,” said Nunavut MP Leona Aglukkaq, also Canada’s health minister, at last week’s IPY conference in Montreal.

But at the IPY conference you wouldn’t have learned much about the results of this massive health survey, conducted in 2007 and 2008.

A total of 1,374 households and 1,923 individuals 18 years of age or older participated in the adult portion of the study, while for the Nunavut Inuit child survey, 388 children, aged three to five, from 16 communities, were poked and prodded.

At the IPY conference, some presenters made references to the Nunavut Inuit health survey, with one researcher presenting an “inconclusive” study on breastfeeding in Nunavut, based on the results of the child health survey.

But here’s what you could learn about the state of health in Nunavut.

Nunavut spends the most per person of all the circumpolar nations on health care delivery, said Dr. Kue Young, during a presentation on communities and health.

That’s more than twice the amount spent in the rest of Canada per person on health care: $4,893.

At the same time, Nunavut continues to lag behind all other circumpolar jurisdictions but Russia in many important health indicators, such as life expectancy and infant mortality.

But the cost of fuel and the constant turnover in medical health professionals plays into the high cost of health delivery, he said, adding that “there has to be a better way.”

At the IPY conference, doctors from Greenland were eager to share their ideas for improved health care delivery.

The government is no longer putting doctors into the 16 large communities. Instead, it’s concentrating on offering services at hospitals in the five major towns, and relying more on telemedicine, Sloth Pederson said during the presentations on communities on health.

At the same time, there’s a new public health campaign in Greenland called Inuuneritta, which will focus on two themes: children, youth and families, and reducing the risk factors for chronic disease, such as diet, smoking, alcohol, and physical activity.

“Only the community itself can change community-based dysfunctions,” Sloth Pederson said.

While Aglukkaq said the Inuit health survey and other IPY research will help Canada to make decisions on the North, which are based on solid information, there are only scant figures posted on the website for the survey’s results.

Many of the important health findings of the survey, conducted in collaboration with the Centre for Indigenous Peoples’ Nutrition and Environment, have never been reported publicly by researchers or health authorities.

For the Nunavut survey, interviewers surveyed adult participants using questionnaires to gather information on diet and lifestyle, such as medical history, mental well-being, physical activity, social support systems, tobacco and alcohol use, and how people feel about the state of their health.

Women were surveyed for bone density and to find out if they got adequate nourishment while pregnant.

A few of the survey’s results have been presented at other conferences, such as:

• most Nunavummiut don’t get enough to eat;

• about half of Nunavut’s children aged three to five don’t get enough food to eat, which means that in Nunavut, young children experience hunger at a rate 10 times greater than children in the rest of Canada;

• about six in 10 Nunavut women breast feed their babies over some period of time.

But some of the other information referred to in the adult survey that Nunavummiut might like to know includes the fact that eight per cent of adults in the survey tested positive for pre-diabetes or diabetes.

And, even more alarming, seven in ten Nunavummiut are infected with Helicobacter pylori bacterium.

H. pylori is a bacterium that lives in the lining of the stomach and is associated with low level inflammation.

The infection, which usually produces no symptoms, can cause stomach pain and lead to ulcers.

“In rare cases, it can cause stomach cancer,” the adult report on the Nunavut Inuit health survey says, although the World Health Organization ranks H. Pylori is a “Class I human carcinogen.”

In Aklavik in the Northwest Territories, where only 50 per cent of the population tested positive for H. Pylori, the rate of infection became big news, and people who tested positive were given a course of antibiotics to treat the infection.

But no similar action has been taken in Nunavut.

You can read the 51-page adult survey, completed two years ago, here and a 15-page summary of the child survey, dated June 2009, here. 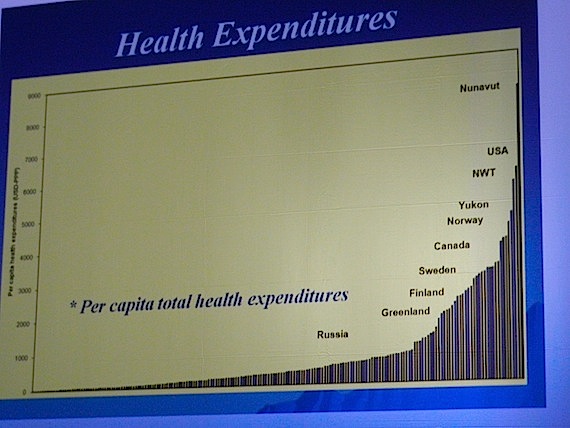 This graph presented during last week’s International Polar Year conference shows how much Nunavut (left) spends per person on health care compared to other circumpolar jurisdictions. (PHOTO BY JANE GEORGE)