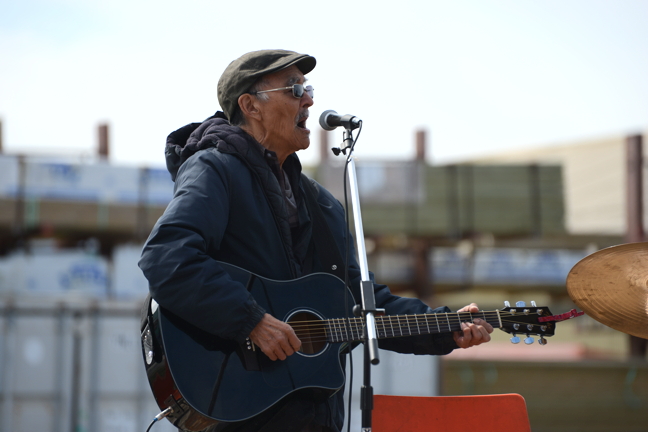 Charlie Panigoniak performs in Rankin Inlet for Nunavut Day 2015. The legendary musician and songwriter is in ailing health so fans and friends in Arviat have organized a tribute concert for him tonight, Aug. 30, at 7 p.m. at the community hall. (PHOTO BY NOEL KALUDJAK) 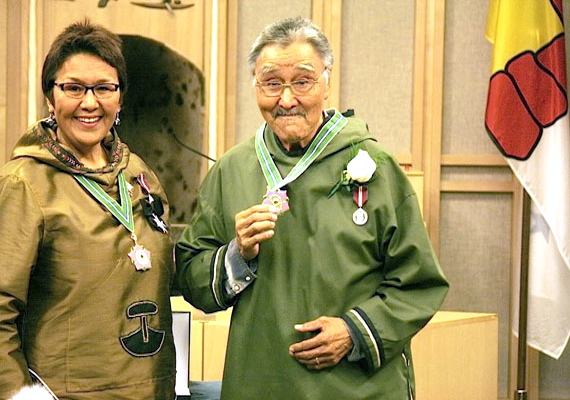 Charlie Panigoniak receives the Order of Nunavut in 2012 from then-Commissioner of Nunavut Edna Elias. (FILE PHOTO)

While southern Canadians celebrated the musical legacy of Tragically Hip frontman Gord Downie, who has terminal cancer, music fans in Arviat have been quietly organizing a tribute to another Canadian musician who is no less legendary in Nunavut.

If you’re in Arviat tonight, you will get a chance to see local musicians pay tribute to the longtime country and folk singer, songwriter and musician Charlie Panigoniak.

Panigoniak, a Nunavut musical pioneer, has for years influenced countless other musicians, including up-and-comer Corey Panika from Rankin Inlet.

“Charlie is really a living legend,” said John Main, a self-employed business development consultant, who grew up in Arviat and helped to organize the Aug. 30 concert.

“He’s on a level very few Inuit musicians have reached. In my mind, he’s way up there on the list of all-time greats in Inuktitut music.”

Charlie and his wife Lorna Panigoniak arrived in Arviat Monday, after their weekend attempts to fly out of Rankin Inlet, where they now live, failed because of fog.

Reached at her Arviat hotel on the morning of Aug. 30, Lorna offered her thoughts on 30 years of performing inside and outside of Nunavut, and what the concert means to both of them.

Awaking to a sore throat, and full of conflicting emotions, Lorna had to hold back tears at times while she reminisced.

The two met in Arviat and fell in love. “He came to me,” she said, giggling. “And he never let go since.”

It was Charlie who taught Lorna how to sing. In the beginning, she sang off key and out of sync with the musical rhythms and he would scold her a lot, she said. But, with practice, she got better.

The first time she performed, she was so nervous. “My legs were just wobbling back then, and shaking.” said Lorna, an education resource coordinator in Rankin Inlet.

“But I found out that music was so much fun. I loved it. I miss it.” she added, choking up. “We haven’t sung for a while.”

She said it was at the Ninette TB Sanitorium in southern Manitoba in 1967 where Charlie met a First Nations man who introduced him to new music. That’s where Charlie bought his first real guitar.

Charlie began writing songs in English but he wasn’t so practiced in that language and the songs didn’t sound right. It wasn’t until he started singing in Inuktitut that his confidence, and popularity, grew, she said. People could relate to the themes in his music.

“He’s humourous and he sings about his life,” she said, adding her favourite song is “Upingaami” which means Springtime in English.

It’s about hearing geese again and going on the land to camp, hunt and collect eggs, she said.

Since those early days, Charlie and his band have performed all across Nunavut, Greenland, Alaska and in southern Canada as well, Lorna said.

Tonight’s concert means a lot to her and she can’t wait to see some of her old friends and bandmates perform Charlie’s songs.

“This is our hometown. It’s in our hearts still. It was overwhelming to hear that we were invited here, especially for Charlie. I know it’s going to be emotional,” she said.

“It’s going to be so touching. I can’t wait to hear them play, bring back memories.”

And obviously, it means the world to Charlie, she said, to be able to participate in his own tribute, to be recognized for his contribution.

He told her recently he feels one of his greatest accomplishments is not just the music he made, but the fact that he wrote his lyrics in Inuktitut, proving that you can honour your own language and still be popular.

“He said Inuktitut, his language, he’s teaching younger kids to speak it through music. I loved it when I heard that. We’ve got to keep our language and it can be any way, through music, speaking and even writing it,” she said.

Charlie also told her that this would probably be his last trip out of town.

The Parkinson’s Disease, which began to chip away at Charlie’s health about 10 years ago, has gotten worse, Lorna said. Medication keeps him functioning but when it starts to wear off, he gets very tired, she said.

Main offered his opinion as to why Panigoniak was so popular.

“His music is uplifting, some of it is more melancholy but the thing I find with his songs, they all have a story, similar to other great artists like Johnny Cash. In that way, his music is very touching. It conveys emotion,” Main said.

Panigoniak’s career really took off after a radio producer started recording his music for the CBC’s Northern Service in the 1970s.

Main isn’t the first to compare him to Johnny Cash: Panigoniak’s story songs centre on family, love, loss and aspects of northern life.

Panigoniak’s smooth tenor voice, coupled with Lorna’s rich backing vocals, made his Inuktitut songs instant hits at a time when there were precious few professionally recorded Inuktitut songs on the radio.

The idea for the concert emerged from the Arviat Music Festival Society which is in the process of reviving the Arviat music festival. The popular event, which had been held annually since the 1980s, ran into financial problems and stopped a few years ago, Main said.

While planning a resurrection of the festival for this coming fall, members of the society, Main included, came up with the idea of promoting local musicians and raising awareness about the local music scene, with a tribute to Panigoniak.

While Panigoniak, an Order of Nunavut recipient, is originally from Chesterfield Inlet, he spent many years living and playing music in Arviat. He has a lot of friends and fans there, Main said.

In fact, some of the people Panigoniak first started playing music with decades ago will be on stage tonight to recognize and honour his legacy.

“Live music is a really big part of everyday life in communities like this where it seems like half the town can pick up a guitar or play the piano or sing a tune,” Main said.

“We have a growing community and part of that means we have new artists coming into the scene all the time. They watched their parents or their friends and relatives performing and no surprise, when they get older, they end up performing themselves.”

Which is why this show is so special, Main said. It’s an opportunity to celebrate the huge contribution Panigoniak has made to modern Inuktitut music and also to feature other artists who are continuing that tradition.

The show gets underway at 7 p.m. at the community hall. Elders are invited to attend for free but organizers will be charging others $5 at the door.

Lorna said she might try to sing tonight, if her sore throat improves. And she said she hopes everyone has a good time tonight.

Main said money raised from entry fees, and through penny sales from 5 p.m. to 7 p.m., will be donated to Panigoniak and his family.

If you can’t make it to the show, but still want to support the ailing performer, contact Main through his Facebook page and he’ll arrange to deliver your donation to the family.