“I would continue to make NTI fiscally responsible and have royalties received from mining, which are now structured to benefit Inuit, to keep on growing” 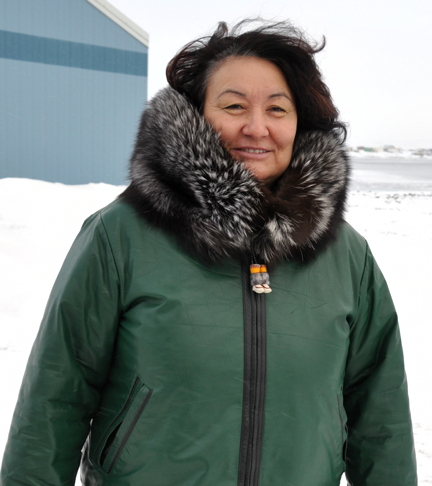 With Nunavut Tunngavik Inc.’s presidential election set for Dec. 12, Nunatsiaq News plans to profile each of the four candidates. We asked the candidates the same four questions. Their responses have been edited for length and clarity. We will run the profiles of the candidates according to alphabetical order.

Advance polling for the election takes place Dec. 5 and voting by proxy is also possible. More information on the election is available here.

What are the issues most important to beneficiaries that you would advocate for as NTI president?

I would continue to make NTI fiscally responsible and have royalties received from mining, which are now structured to benefit Inuit, to keep on growing. Secondly, out of the $175 million [settled with the federal government for land claim violations] we need priority areas for employment training for Inuit.

Given low NTI voter turnouts of 35 per cent or less, and vote splitting, NTI executive members are often elected by a minority of votes cast. How do you make NTI elections more meaningful to beneficiaries? Is NTI losing its political legitimacy?

NTI, up until Nov. 9, was donating for youth an iPad, but the youth had to put up their picture saying “I will vote for the first time,” to get the youth voting.

As for legitimacy, NTI, the Nunavut Lands Claim Agreement is a constitutional agreement, so legally it will exist regardless of the voter turnout, but it’s important that Inuit make their voice heard.

The last NTI annual general meeting, through the media and the computer, was aired all over Canada, so anybody can tune into the computers and start listening to the NTI meetings and AGM.

Technology is being used to access a lot, to get Inuit involvement into listening to NTI discussions because NTI covers a whole range of issues right across Nunavut, and its not just the NLCA, we partner with Canada on climate change.

We partner with the Government of Nunavut on education and training and how to move Inuit from their management position to higher levels and we work and partner with GN on how to start using the $175 million, which I signed off on, so Inuit could be targeted under Article 23.

The president and other NTI and regional Inuit association executives control the management of the Makigiaqta Inuit Training Corp., formed with $175 million in federal settlement money set aside to train Inuit for government jobs. Because NTI is not a public body, how would you ensure that this vital service remains transparent and accountable to beneficiaries?

Under the settlement, the Government of Canada agreed to develop a labour force survey [to see] where Inuit are at, which Inuit individuals we can train. To make it accountable and transparent, there is an advisory committee.

[Inuit Training Corp. board members from] the GN, NTI and the three RIAs will give eight priority areas to both GN and NTI where those dollars could be focused on or go for community based training or enhance other areas.

It hasn’t been spent—we’re just developing a strategic plan based on the labour force survey [which was completed by the Government of Canada over the summer].

Some students are living almost on $75 dollars a month, so NTI was developing scholarships to enhance student support and also daycares [which would be offered through Makigiaqta Inuit Training Corp.].

NTI was strategizing how best to enhance programs that are successful and not to duplicate programs but just to enhance them, assist training education and students.

The board of directors was just in the process of developing what groups we needed to target and the advisory committee was going to give us eight priority areas and that was not produced yet.

There are multiple layers we need to look at. First of all, some students, from smaller communities like Cambridge Bay, have to travel to Iqaluit to take their courses there and are not finishing their courses because they are so far away from home.

We need to look at community-based training with industries. If beneficiaries want to prepare for a mining job, we get a journeyman to the community and train a number of people. That worked out very well with Arviat. It was called the “drilling program,” where Inuit were trained to be drillers.

A few years ago with Diavik Diamond Mine in Kugluktuk, the industry brought in journeyman and they went through community-based training and they trained at the communities for what positions and opportunities were available. We need to seriously look at smaller communities because the regional centres are increasing—they’re producing—but the smaller communities are being left out.

Industry and NTI have to lobby Canada because industry alone—mining alone—cannot provide those opportunities. We have an infrastructure deficit and it’s the responsibility of governments to build ports, highways.