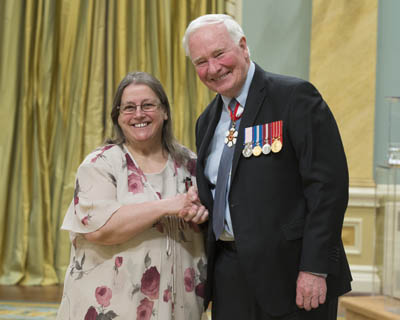 Two Rankin Inlet volunteers are recipients of Governor General awards for their long-time work with the Nunavut community’s food bank.

Ikurraq, also known locally as the Deacon’s Cupboard, has operated in Rankin Inlet since the mid-1990s. The food bank provides meal packages to local families in need as well as operating a second-hand shop on the weekend.

Since it started up, two local women, Kathleen Irwin and Mary Fredlund, have been crucial to its operation.

The women were among 46 Canadians honoured with the Governor General’s Sovereign’s Medal for Volunteers April 24 at Rideau Hall in Ottawa.

The Medal for Volunteers recognizes the exceptional volunteer achievements of Canadians from across the country.

About 30 Rankin Inlet families visit the Ikurraq food bank at least once every month, say its co-ordinators.

The second-hand store helps raise some money for the food bank but it still relies on fundraising and other donations to stay afloat.

A recent interest in food security in southern Canada has meant more donations and food packages being shipped directly to the food bank.

Rankin Inlet residents congratulated Irwin and Fredlund on their awards in a post on the food bank’s Facebook page.

“It is certainly a well-deserved recognition!” wrote a community member.