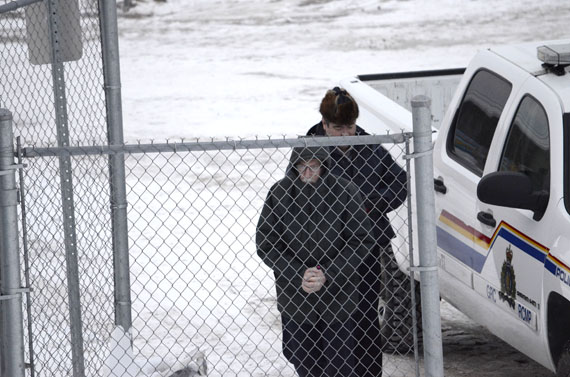 Oblate priest Eric Dejaeger is led into court during his trial in Iqaluit, which started Nov. 18 before Justice Robert Kilpatrick. (FILE PHOTO)

On the first day of week two at the Eric Dejaeger trial in Iqaluit, a witness said Dejaeger told her she would go to hell if she told anyone about his sexual advances.

The woman, now 39, but a young girl at the time, said the Oblate priest fondled her during colouring time at the St. Stephen’s Catholic Church in Igloolik.

The incident forms one of many alleged to have occurred between 1978 and 1982, when Dejaeger worked as a priest in Igloolik.

The witness said she didn’t understand much English at the time, only Inuktitut, but still found herself surrounded by other children at a table in church at a religion class taught by Dejaeger, who spoke only English to them.

Through spells of wiping away tears and crying in the witness box, the witness said Dejaeger asked her to colour while “he put me on his lap.”

“I didn’t know what was going on,” the witness said.

She said Dejaeger held her “hard” around the waist, and fondled her.

The witness said it hurt, and she tried to take his hands off her, but he was too strong.

“I was trying to escape,” she said.

Eventually she got free and hid under the table before running away to the porch.

She said Dejaeger said that if she told anyone, she would go to hell.

The witness said she ran home and into a washroom. When she found blood on her underwear, she threw it away.

That was the last time she attended church, the witness told Crown prosecutor Doug Curliss.

She said Dejaeger touched her only once. But she said the incident created lasting negative effects.

In cross-examination at the Nunavut Court of Justice in Iqaluit, defence lawyer Malcolm Kempt read her a statement she gave to the RCMP in 2012.

Kempt said the witness first came forward to tell her mother about the sexual assault, in 1988, at the age of 14, because she had been caught “doing bad things.”

The witness agreed she sniffed gasoline at age 14. She said her mother had heard about Dejaeger in the news asked her if she was sniffing gasoline because of him.

Kempt asked if she blamed her marital troubles on Dejaeger and if she had flashbacks about the incident. The witness nodded.

Kempt also asked how the witness could have understood Dejaeger if she only spoke Inuktitut and she didn’t understand English.

She said that although she did not speak English fluently, she knew basic terms like heaven and hell, which the church had taught her.

The witness also said she received compensation from the Catholic church, although she said she forgot how much she had won from them.

Another witness who appeared earlier on Nov. 25 testified about how Dejaeger sexually assaulted him.

He said he woke up in the church and found Dejaeger touching him.

“I got so scared I blacked out,” the witness said.

The witness went on to say this happened two or three times.

He said that at one time there were several children all around him, all sleeping in the church.

He later went on to say, while the defense cross-examined him, that he tried to wake some of them up but couldn’t.

The witness also said he took pills that Dejaeger had given him. He said he thought they made him fall asleep.

However, the witness agreed with the defence that his memory is “very hazy” and that he could not remember his exact age when the assaults took place.

But the witness dismissed a suggestion by Kempt that it was all part of a dream.

Dejaeger, a Belgian-born Oblate missionary who became a Canadian citizen in the 1970s, has already served a five-year prison sentence imposed in 1990 after he was found guilty of sex crimes that occurred in Baker Lake between 1982 and 1989.

He now faces 77 new charges stemming from his time in Igloolik, where he was stationed before Baker Lake.

Of those, he has pleaded guilty to eight charges of indecent assault.

The judge-alone trial continues Nov. 26. It’s expected to last another five weeks or so.