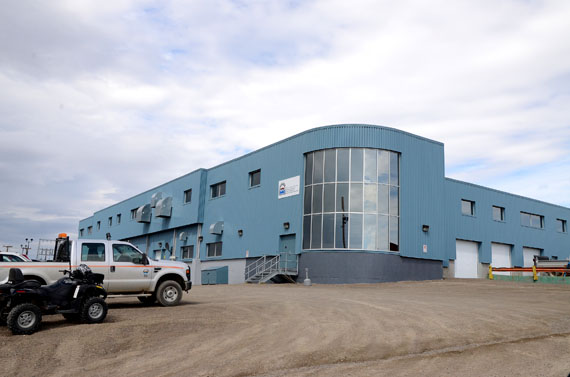 Iqaluit’s recently renovated power plant. Nunavut’s energy minister, Monica Ell, said the GN will likely participate in a future meetings of a provincial-territorial task force that has been set up to reduce dependency on diesel fuel for generating electricity. (FILE PHOTO)

In a territory where all 25 communities are powered by diesel generators, Nunavut’s reliance on expensive, dirty fossil fuels is an addiction that many Nunavummiut are anxious to kick.

But when a pan-Canadian task force formed this past summer to look at ways to reduce the use of diesel fuel used to generate electricity in remote communities, Nunavut wasn’t at the table.

When this current session of the legislative assembly began last week, Iqaluit-Tasiluk MLA George Hickes wanted to know why governments in Canada’s two other northern territories, along with those in Manitoba, Ontario, Quebec and Newfoundland and Labrador had signed on to the task force, but not Nunavut.

“Can the minister indicate how the Government of Nunavut plans to contribute to the important work of this national task force?” Hickes said Oct. 21 in a question put to Nunavut’s energy minister Monica Ell-Kanayuk.

Ell-Kanayuk missed the task force’s founding meeting last July when she attended another conference, although she said an official from her department took part.

“Our communities are powered by diesel generators and we all want to come up with ways that we can reduce our dependence on diesel fuel and we will continue to work on that,” she replied to Hickes’ question.

The pan-Canadian task force will be chaired by Manitoba and made up of officials from each of the provincial and territorial departments that oversee energy.

The task force’s main goal is to prepare a joint report that looks at the needs of the country’s nearly 300 off-grid communities and outlines any initiatives towards alternative energy or grid connection in those regions.

While Ell-Kanayuk said grid connection isn’t a possibility for the territory’s High Arctic communities, the Kivalliq region has been studying for years the potential of linking to Manitoba Hydro’s grid in Churchill.

A study released in September, commissioned by the Kivalliq Inuit Association, says that the project to extend transmission lines from Churchill up along the Hudson coast is economically viable, environmentally beneficial, and should move forward soon.

But with an estimated cost of at least $904 million, the Government of Nunavut has yet to commit its financial support to the project.

Johnny Mike, Nunavut’s minister of community and government services, told the legislature last week that his department is still reviewing the new study.

“Our strategizing is quite unique from the other Canadian jurisdictions on how to reduce our use of fossil fuels when we live in remote communities,” Ell-Kanayuk said.

But the minister hinted that Nunavut could be part of discussions at the next meeting of the task force.

“Manitoba will be hosting their first meeting of the task force to bring participants together to start sharing information and begin discussions on the use of diesel fuel in remote communities,” she said.

“Our first priority will be to look at what can we do in a remote community when we are not connected by roads, how can we move forward to reduce diesel reliance in Nunavut.”