Half of Nunavut’s population younger than 25.8 years 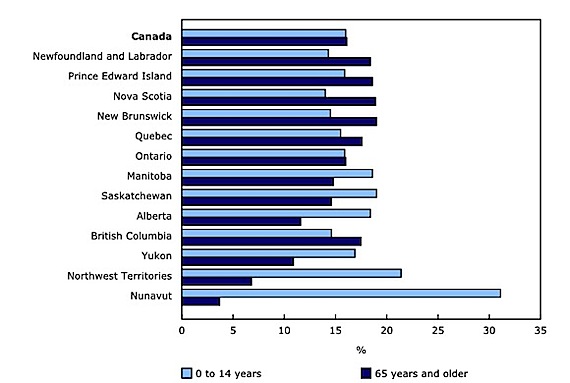 This StatsCan graph shows how the percentage of residents in each Canadian jurisdiction aged 0 to 14 years compares to those who are 65 years and older.

Nunavut continues to be the youngest jurisdiction in Canada. That’s according to a Sept. 29 Statistics Canada report.

StatsCan reveals that in 2015, 31 per cent of Nunavut’s population — slightly less than one in three Nunavummiut — is under the age of 14.

This makes Nunavut by far the province or territory with the youngest population.

Quite a different situation can be found in the rest of Canada where the number of persons aged 65 years and older exceeds the number of children aged 0 to 14 years.

The tables also show that, during the first six months of this year, Nunavut increased its numbers by 406 births, while 101 residents died.

The territory’s growth stands above the national average, at 2.3 per cent.

Meanwhile, the population decreased in two provinces, Newfoundland and Labrador and New Brunswick.

With respect to its growth rate, Nunavut ranks second only to Alberta, but in that province, most of the growth is due to people moving there, not to a high birth rate. 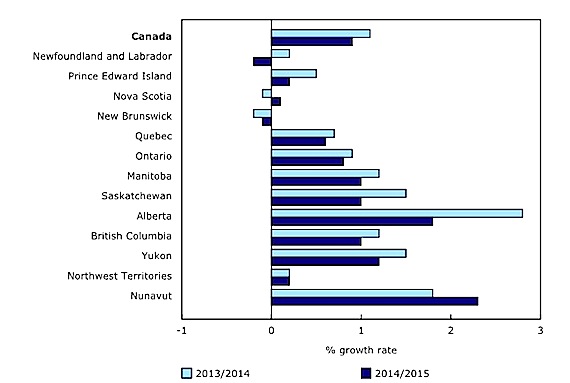 This StatsCan graphs shows Nunavut’s growth rate compared to other jurisdictions in Canada.