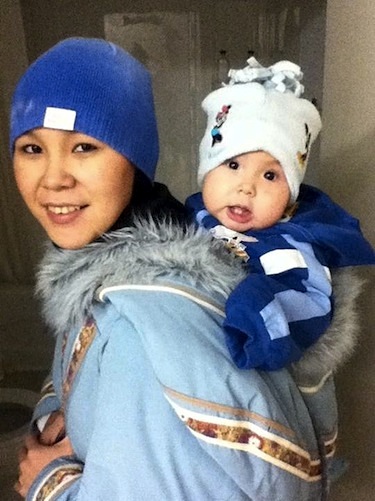 Tracy Uttak, 26, died Nov. 29, 2012 in Igloolik. The lawyer representing a youth accused of killing her is attempting to prove that his client did not have the mental capacity to understand what he was doing when he killed her. (FILE PHOTO)

A young Nunavut man currently standing trial in Iqaluit for second-degree murder in connection with the 2012 death in Igloolik of 26-year-old Tracy Uttak, heard voices in his head for months after being remanded in custody at Iqaluit’s facility for youth offenders.

Sometimes those voices told him to do harmful, violent things, but the accused man fought back against those voices, resisting the urge to obey them.

That’s according to the testimony of the accused man’s case and program manager at the youth facility, Richard Brent Buckler, in the Nunavut Court of Justice in Iqaluit.

The identity of the young man, who is now 19, is protected under the Youth Criminal Justice Act because he was only 16 in 2012, when he was charged with first degree murder.

The accused man is referred to as “X” for the purposes of this story.

The accused made his first court appearance, visibly upset, on Dec. 5 that same year.

And “X” admitted to being the cause of Uttak’s death, defence lawyer Shayne Kert said to Justice Andy Mahar in an Iqaluit courtroom March 25.

Buckler’s testimony before Mahar came on the third day of a judge-alone trial, scheduled to run until April 10.

According to Buckler’s testimony, “X” said there were two versions of himself: a good version and a bad version.

“Don’t let the bad [“X”] come out,” Buckler said the accused told him.

The accused was brought to Iqaluit’s youth offender facility on Dec. 4, 2012, Buckler testified.

“He was the most emotionally distraught youth I’d seen brought in in 15 years,” Buckler said.

“He couldn’t understand why his parents couldn’t just pick him up from the facility.”

But at the same time, Buckler said “X” understood that he had been charged with murder.

Although the trial is still in early stages, the defence’s case likely rests on questioning whether “X” had the mental capacity to be fully aware of what he was doing on Nov. 29, 2012.

Kert revealed that, according to his medical records, “X” had already been diagnosed with “some form of psychosis,” and had been prescribed an anti-psychotic drug before the night Uttak died.

Kert asked Buckler to describe the level of mental awareness of “X” when Buckler performed the intake assessment on Dec. 4, 2012.

“He seemed mentally young for his body size,” Buckler replied.

Kert also asked Buckler if “X” revealed any substance-abuse problems before being remanded in custody.

Buckler said “X” admitted to regularly sniffing propane and gasoline, and that his drug of choice was marijuana.

According to conversations with the accused, Buckler said “X” had ingested psychedelic mushrooms on the night Uttak died.

“From my knowledge, there were three drugs in his system that night: marijuana… mushrooms and gas,” Buckler said.

Buckler said “X” told him “numerous times” about the “upsetting” voices in his head in the months after he arrived at the youth facility in Iqaluit.

Crown lawyer Abel Dion asked Buckler if “X” ever talked about hearing voices on the night of Uttak’s death.

“Not to me personally, no,” Buckler replied.

But there was one particular incident in February, 2013, that stood out in Buckler’s mind.

He had just arrived to work at 8:30 a.m., and within five minutes “X” was standing in his office.

The previous night, “X” had heard voices telling him to kill specific staff members at the youth facility, Buckler testified.

“But he fought the voices, I think, because he didn’t carry out any actions.”

Instead, Buckler said, “X” informed him about the voices — “very matter of factly”— the next morning.

“At the time I thought, wow, we really dodged a bullet that night,” Buckler said, adding that staff took immediate steps to get “X” a psychiatric assessment for new medication.

Kert’s cross-examination of Buckler continued after the morning break March 25.

A number of witnesses, including a psychiatrist, are scheduled to testify before the trial’s scheduled end-date, April 10.

The accused, wearing a white short-sleeved button shirt, sat calmly at the table with his lawyer, fidgeting and stretching with what appeared to be boredom a few times throughout the morning’s testimony.

At one point he took a small red book out of his shirt pocket — with writing scrawled in ink on his hands — and jotted something down, before putting the small book back in his pocket.

He said “Hi” to a woman in the court gallery twice during open court, and at the morning break gave the same woman a picture drawn in ink.

He explained the picture to the woman in Inuktitut with a big grin on his face, before a court worker told him he should use the break to go to the bathroom if he needed to.

The Crown has given notice that, should the young man be found guilty, they will make an application under the Youth Criminal Justice Act for an order that would have him sentenced as an adult.

If the judge decides in the Crown’s favour, then “X” would be sentenced as an adult.