Nunavut teen from Igloolik wins Alianait battle of the bands 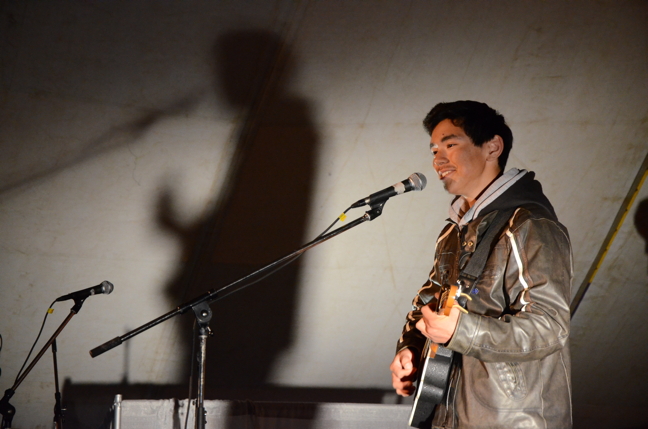 Joshua Haulli plays a final song after he was crowned champion at Alianait’s Battle of the Band’s June 28. (PHOTO BY DAVID MURPHY) 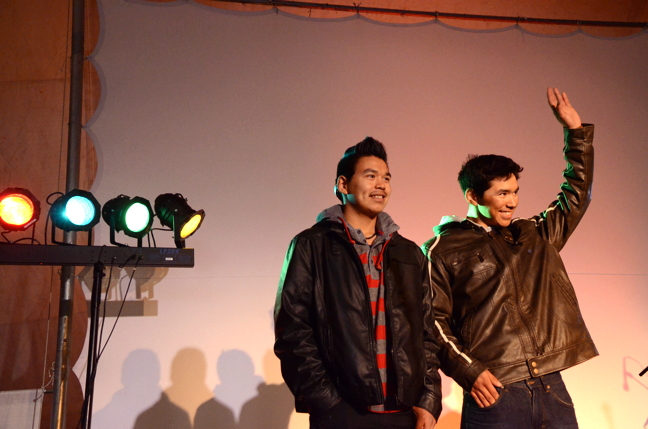 Ricky Immaroitok, left, stands beside the winner of Alianait’s 2015 Battle of the Bands competition — 16-year-old Joshua Haulli from Igloolik. (PHOTO BY DAVID MURPHY)

The 16-year-old and his friend, Ricky Immaroitok, 18, flew from Igloolik on their own dime to win the $1,000 grand prize June 28 under the big top tent in Iqaluit.

The Battle of the Bands is an annual Alianait competition where groups play two songs each and the crowd decides which band deserves first, second and third place.

Despite the rain, about three dozen people turned up to see Haulli take the crown.

Participants sang in both English and Inuktitut and one of the lead singers from Greenland’s Nanook band, Frederik K. Elsner, gave feedback in both languages to the performers as well, as one of the judges. Pauline Pemik from CBC also helped judge the competition.

It came down to three artists in the end but based on cheers from the crowd, Haulli topped the other two finalists.

NN: Can you describe your type of music?

Immaroitok: He writes his own songs.

Haulli: I don’t really play rock. I don’t know how to describe it. Inuktitut music.

NN: When did you start playing?

Immaroitok: About five years ago.

NN: Where did you start playing?

Haulli: My brother got me interested in playing. I didn’t know how to play guitar but he started learning so I was listening to his playing.

NN: What’s your biggest influence? What bands do you like?

NN: What is the song “Pajiisuutigut” about?

NN: Who do you want to thank?

Haulli: I’d like to thank Ricky and the Alianait staff.

NN: Where are you going to play next?

Haulli: I don’t know. I’m just going to go with the flow.

NN: Where can people find your music?

Haulli: I think there’s some videos on my Facebook page.

NN: Do you have plans to record some music in the future?