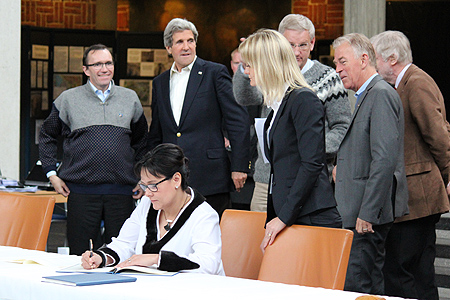 Nunavut MP Leona Aglukkaq, Canada’s minister responsible for the Arctic Council, signs the Kiruna Declaration May 15 at the Arctic Council ministerial meeting in Kiruna at the city hall. (PHOTO BY MARTINA HUBER/ REGERINGSKANSLIET) 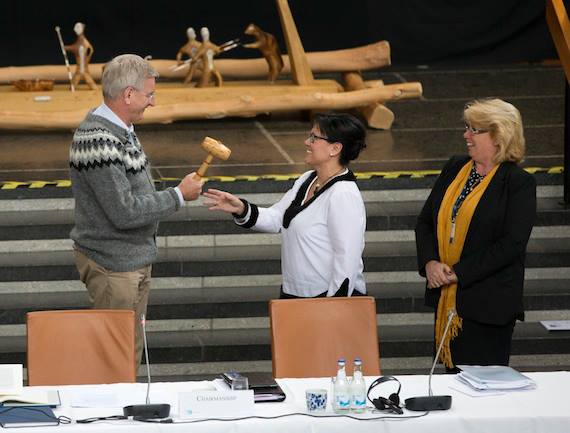 Sweden’s Minister of Foreign Affairs Carl Bildt hands over the ceremonial gavel to Nunavut MP Leona Aglukkaq, Canada’s minister responsible for the Arctic Council, May 15 at the Arctic Council ministerial meeting in Kiruna, Sweden. That marked the transfer of chairmanship of the Arctic Council to Canada. (PHOTO BY MARTINA HUBER/ REGERINGSKANSLIET)

KIRUNA, SWEDEN — For the first time since the Arctic Council was created two decades ago, Canada is back in charge.

Nunavut MP Leona Aglukkaq, who is also Canada’s minister responsible for Arctic Council, received the ceremonial wooden mallet from now-former chairman Carl Bildt of Sweden May 15 in the mining town of Kiruna, in northern Sweden.

As the new chair, Aglukkaq used her first words as chair to remind her fellow ministers “the Arctic Council was formed by northerners, for northerners, long before the region was of interest to the rest of the world.”

At the Arctic Council’s first ministerial meeting in September 1998, held in Iqaluit, Lloyd Axworthy, then the minister of foreign affairs, headed the Canadian delegation.

He was assisted by Mary Simon, then the Arctic ambassador, who played a prominent role as Canada’s “senior Arctic official,” or SAO, and chaired many meetings related to the Arctic Council’s work.

Now, the Conservative government has appointed Patrick Borbey to chair Arctic Council SAO meetings during Canada’s chairmanship of the council, while Sigrid Anna Johnson, a career diplomat, will continue to act as Canada’s SAO.

“Development for people in the North” is, in a nutshell, Canada’s guiding principle for the next two years, Aglukkaq announced to a crowd of top ministers—among them, Secretary of State John Kerry of the United States.

Aglukkaq was clear that the Canadian chairmanship would be an opportunity to refocus on those who reside north of the 60th parallel in the face of the growing global important of the Arctic region.

This comes as countries across the world—from Arctic and non-Arctic regions alike— have begun to look north, as the melting of polar ice and thawing of permafrost promises new northern shipping routes and fresh stores of valuable minerals.

The European Union was notably absent from that list. Canada and Aglukkaq were under growing pressure from Inuit organizations in Canada to use their influence to reject the EU’s application for observer status to protest the 2011 EU ban on seal products.

Although Swedish foreign minister Bildt explained the council had received the EU’s application “affirmatively,” he said the council deferred a final decision until the council had agreed by consensus that the “concerns of council members” had been addressed.

In a cautious statement, U.K. MP Catherine Ashton, the EU’s foreign affairs representative and Maria Damanaki , the EU Commissioner for maritime affairs and fisheries, concealed any disappointment they may have experienced over the deferral of the EU application.

“The EU welcomes the Arctic Council’s decision on the EU’s application for permanent observership. The EU considers the Arctic Council a primary international forum for Arctic cooperation and looks forward to stepping up its engagement with the Arctic partners in tackling the challenges faced by this region of increasing importance,” the statement said.

Aglukkaq identified a number of other goals for the Canadian term at the head of the council.

There will be a new task force to develop an action plan on oil pollution and prevention, she said, as any oil spills would have a “disastrous” impact on northern environments and communities.

“To help slow climate change,” she said, the council will continue its work on short term polluters” like black carbon and methane, the reduction of which will have “substantial health benefits for northerners.”

The council will also start work on the much-hyped Polar Business Forum, which will “provide a way for business and industry to engage with the Arctic states and permanent participants.”

The initial focus of which will be the development of natural resources in the circumpolar region.

“Finally as someone with deep attachment to the Arctic, my Arctic home,” she said, “I understand the vital importance of traditional ways of life to the indigenous people.”

“Throughout Canada’s chairmanship, we will work to increase awareness of the importance of traditional ways of life of Arctic indigenous peoples.”

Smaller goals include changes to cruise ship operation, promotion of tradition, the promotion of mental wellness in northern communities and adaption to climate change.

National health minister since 2008 and announced as Canada’s Arctic Council chair last summer, Aglukkaq has long been preparing for a bigger role on the world stage.

When answering questions after the meeting had ended, she couldn’t help but break out into a grin when congratulated on becoming the first northern leader of the organization that aspires to guide development in the High North.

“It is a great honour for me, as an Inuk born and raised in the Arctic, to accept the role as chair of the Arctic Council. This is the first time that an Arctic indigenous person has had this responsibility and I am honoured to lead the council into this new era.”