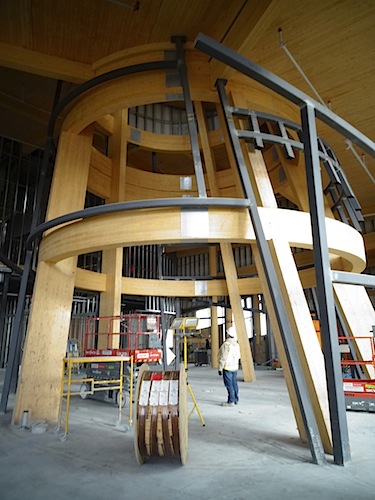 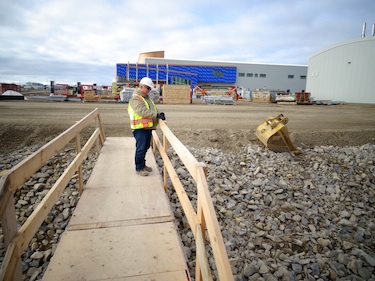 Here you can see CHARS construction site supervisor Grant Bennett overlooking one of the rock covered culverts around the site. In the background, the front entrance to the main science building and to the right the maintenance building (the complex also includes triplexes, which we did not visit because they’re already occupied.) (PHOTO BY JANE GEORGE) 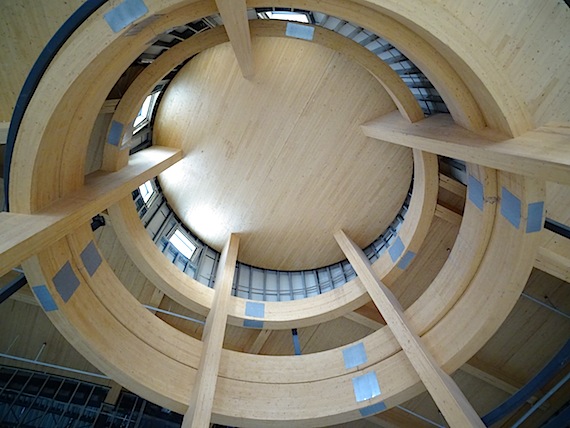 When you look up in the middle of the science building’s public space, this is what you see. (PHOTO BY JANE GEORGE) 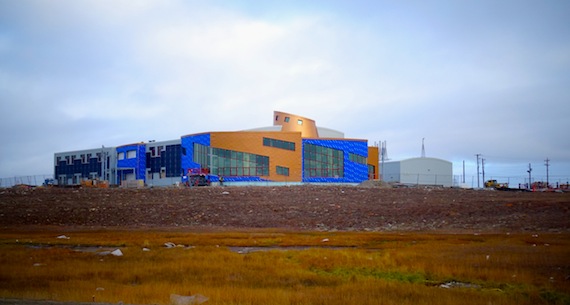 The outside of Canadian High Arctic Research Station, seen here in a recent view, will be covered in a copper-coloured material before winter sets in. (PHOTO BY JANE GEORGE)

The design of the main science building, copper-coloured for the Copper Inuit heritage of the region, is supposed to reflect the curved spaces of large qaggiq snow houses.

But the building, with its castle-like turret and wall of solar panels, conjures up many other things too, such as a monument to science and technology, or a structural reflection of the Mt. Pelly esker off in the distance.

But no matter what it reminds you of, the CHARS building always looks big. At 50,000 square feet, with what some claim is the greatest amount of square-footage of any building in Canada’s North, it rises up in a place that’s more flat than mountainous, where only the white radar bulbs of the Cam Main North Warning System site come close to matching its height.

CHARS architect Alain Fournier says he didn’t want the huge science building to look or feel like a battleship so he strived for accessibility, with one entrance facing the community and accessed by a path leading over wetlands from Cambridge Bay.

Fournier also wanted his design to incorporate the principles of Inuit Qaujimatuqangit—piliriqatigiingniq (collaborative relationship), avatimik kamattiarniq (environmental stewardship), qanuqtuurungarniq (resourcefulness to solve problems) and pilimmaksarniq (skills and knowledge acquisition)—so the building’s public space would be inviting enough for people to feel a warm welcome inside.

If you live in the North, you already know Fournier’s finished architectural work. His company, Fournier, Gersovitz, Moss, Drolet et associés, produced the yellow airport terminal in Iqaluit and those in Kuujjuaq and Puvirnituq, along with Nunavik’s child care centres and the community science centre in Kuujjuaraapik.

But CHARS is different, mainly due its size and grand elements.

A walk with site supervisor Grant Bennett, from the Don Ellis construction company, which takes us through the finished maintenance building, reveals the mechanical heart of CHARS with its complex maze of pipes, boilers, pumps and other equipment that will bring heat and water to the site, keeping the complex going during even the coldest days of the dark winter.

The main science building, now closed in but whose future offices and laboratories are still mostly marked out by steel girders, contains the public space, framed by a towering round structure of wooden beams in the centre.

Fournier says he wanted to use wood there because it’s natural—not because trees grow around Cambridge Bay, he said, but because wood was traditionally used, and prized, for qamutik sleds.

Looking upwards, the view is dizzying.

In the circular space below, Fournier hopes that people—up to 100—will regularly gather there.

“It’ll be a great place to sit around and have tea,” said Fournier, who paid a site visit to CHARS last week.

Big windows open out to Mt. Pelly, while inside there will be artwork for people to admire. Artists from across the North have been invited to draw their inspiration from the past and present the “ingenuity of Inuit culture,” getting inspiration from creations like the ulu, qulliq, qajaq and qamutik.

The artwork is expected to translate Inuit ways of doing things into the building.

The Kitikmeot Heritage Society received a commission for elder sewers to work on a three-piece wall hanging called “A stitch in time,” whose design includes family portraits against backgrounds ranging from a snow house to the former Distance Early Warning line site and the now-demolished long-range navigation tower to CHARS itself.

Artists are also submitting designs for glass privacy screens—large three-dimensional works to be displayed in a case and hung from the ceiling—and images, using colours with names like “sandbox,” “barbecue,” “heatwave,” “Clydesdale” and “hayride,” which will be set into the floors, similar to those you can see on the floor of the Kuujjuaq airport.

A committee, with members including the Kitikmeot Heritage Society’s executive director, Pamela Gross, will help select the winning art designs in October.

Fournier says they’ll be looking for leading-edge art from around the Inuit regions to match the leading-edge science CHARS intends to produce.

Although the CHARS headquarters will be in Cambridge Bay, its activities will span the Northwest Territories, Nunavut, Nunavik and Nunatsiavut, said David Scott, president and CEO of Polar Knowledge Canada, the federal agency that oversees what takes place at CHARS.

“So we have this huge footprint to cover,” Scott said in a recent interview from Ottawa.

But right now, CHARS operations have a relatively limited presence on the ground with mainly rotational staff and a handful of permanent on-site employees, including a few from the region.

The CHARS chief scientist, Martin Raillard, who came on to lead the science program in 2014, has now been on leave of absence since last year—and Scott couldn’t comment on whether Raillard plans to return.

But CHARS is in the midst of a hiring period, Scott said.

New hires from outside Cambridge Bay won’t move north until they have housing, so there could be four to six arriving over the coming months, with more arriving after the next big wave of 10 houses are finished in April. CHARS is expected to bring at least 30 new jobs to Cambridge Bay.

As for its priority areas of work, these include alternative and renewable energy for the North—and incorporating traditional knowledge, many hope.

Researchers have already started on several projects, including a collaboration on wind energy potential and baseline studies of the environment around Cambridge Bay to measure, over time, the impacts of climate change here.

The challenge now is to capacity-build so that, in years to come, more CHARS employees, who need to complete advanced studies, will come from Cambridge Bay, Scott said.

“It’s going to take us time to grow that capacity,” he said, adding that Polar Knowledge has funded Nunavut Arctic College’s environmental technology program in Cambridge Bay and regularly holds outreach science-based activities with youth. “We’ll continue to grow that capacity which we know really exists.”

That will be easier when there is a finished facility to fuel enthusiasm, he said.

CHARS, with a pricetag of $204 million, is slated to open July 1, 2017, with all the fanfare of Canada’s 150th birthday and a visit from Prime Minister Justin Trudeau.

The entire complex should be handed over to Polar Knowledge in about a year’s time.