“We’ll just start permeating some brains, or exposing the culture” 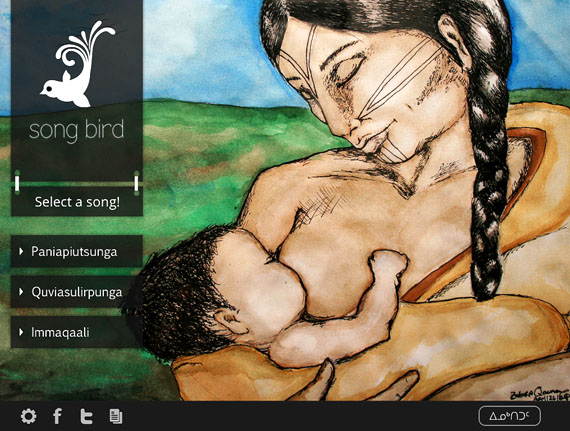 Songbird is an app created by Pinnguaq to help others learn Inuktitut through song. (PHOTO COURTESY OF RYAN OLIVER) 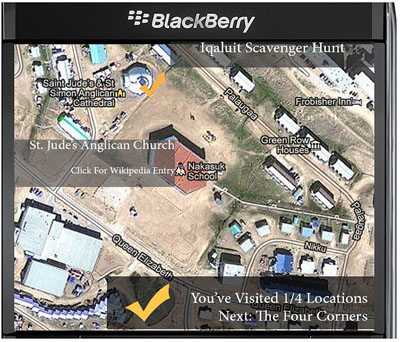 A boy runs and jumps around frantically on ice blocks, in the dark, trying to escape the legendary Qalupalik.

He can’t see the Qalupalik — a mythical Inuit sea monster that grabs humans while they’re jumping across ice pans — because the monster hides underwater, trying to snag people at the most opportune time.

The Qalupalik wants to drag the boy down to a watery grave — but the boy has an indication of when the Qalupalik will strike.

When the Qalupalik approaches the boy, Inuit throat singers give a warning by singing faster.

“It will get more and more intense until you’re freaking out and just running wildly, maybe fall in the water accidently — and then it’s over.”

That’s the description of the new animated game called Qalupalik, made by Ryan Oliver, the director of the Pangnirtung tech startup company Pinnguaq, with big contributions from artists like Jolly Atagoyuk.

“The stories here are so good. Honestly, this is just one of many amazingly awesome myths. They’re so good that I’m surprised no one’s tapped into it so far,” Oliver said.

The game, which Oliver displayed at the Nunavut Trade Show Sept. 25 and Sept. 26, is still in its infancy, but the basics are coming together. It will be a multi-player game, which features lots of Inuktitut and has an emphasis on Inuit culture.

Oliver, who created Pinnguaq, said the game links the rest of the world to Inuit culture.

“We’re trying to make it so that this game is not going to be [just] made for a Nunavut audience — it’s going to be for the mass market,” Oliver said.

The game will be featured in Inuktitut, with the option of other languages in subtitles, Oliver said.

“A lot of video games, the audio can just be in a gibberish language and it just adds to the appeal of it,” he said.

“You won’t have to know Inuktitut to be able to play the game. We can have all the dialogue, all the cut scenes, in Inuktitut, but just provide English subtitles and no one will even think twice about it.”

“We’ll just start permeating some brains, or exposing the culture — and exposing it from a company that’s coming from here will ensure that the representation will happen,” he said.

This game is just one of the three new programs Oliver showed off at the Nunavut Trade Show in Iqaluit at the municipality of Pangnirtung booth.

Oliver has already helped translate the award-winning gaming app Osmos into Inuktitut, and his app “Songbird” is going live sometime in November.

Songbird is intended as a kind of Inuktitut Rosetta Stone. The difference is that the user will learn to memorize words through songs, and be exposed to images featuring Inuit artists who relate to the song.

“I was in a class a while ago, and there was this Cree elder teaching the class. And he said, ‘to teach you some Cree, we’re going to sing you some songs,’” Oliver said.

“So he sang these songs, and there’s a lot of repetition in them and you begin to pick up words,” he said.

Eventually, Oliver wants to add more languages to Songbird, such as French, Spanish and other Aboriginal languages.

But for now, “it’s a portfolio piece” to add to Pinnguaq’s exposure, all the meanwhile exposing Inuit artists and culture.

Oliver also has an app called Inuktitube — an app that streams Inuktitut videos from YouTube to one location — and a mapping app in the works too, called Nunavut Passport.

Nunavut Passport is designed as a GPS on your smart phone, which will show you where to go to in Nunavut communities.

The user can unlock rewards when they visit attractions, like discounts at certain businesses featured on the app.

The pilot for the app will begin in Iqaluit and Pangnirtung about a year from now, no matter whether 3G technology comes to Nunavut.

Oliver said this app, along with other apps, is intended not only to expose Inuit culture to the south, but also to bring the 21st century to Nunavut.

“As much as we can, we’ll pull Nunavut along with us, but at the same time I think we’ll hopefully also pull the rest of the world up here to say — check this out.