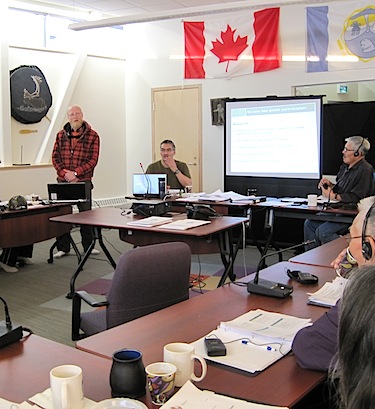 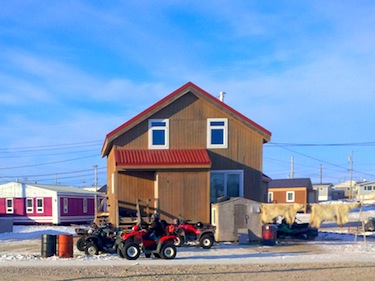 Two polar bear skins dry outside a home in Cambridge Bay, which has an annual polar bear quota of three polar bears shared with Gjoa Haven. (PHOTO BY JANE GEORGE) A female polar bear and her two cubs dash across the ice near Gjoa Haven, where the polar bear hunt has been limited for nearly 15 years. (PHOTO BY JANE GEORGE)

CAMBRIDGE BAY — Increasing the polar bear quota in western Nunavut’s M’Clintock Channel in exchange for permission to collar polar bears: that’s a plan which could work, joked James Qitsualik of Gjoa Haven Oct. 17 during an otherwise heated discussion at the Kitikmeot Regional Wildlife Board meeting in Cambridge Bay.

The talk between Nunavut’s senior polar bear biologist Markus Dyck and the board showed there’s still a huge gap between how Inuit and scientists want to count polar bears.

During the second year of its three-year M’Clintock Channel polar bear survey, the Government of Nunavut wants to collar 15 female polar bears and satellite tag up to 10 male polar bears, handling a maximum of 50 bears, Dyck said.

But that didn’t go over well for many delegates around the KWRB table, who said they aren’t persuaded that this part of the survey, slated to start in April 2015, is worthwhile or necessary.

Among their top criticisms: hunters say they see many polar bears and they believe the population has increased. They also don’t like polar bears to be drugged and handled, despite assurances that the tranquilizers used by researchers wear off in 42 days.

Hunters in the Kitikmeot region’s five communities haven’t been able to hunt more than three polar bears a year in the M’Clintock Channel since 2005.

And that paltry quota came after four years of a total moratorium on polar bear hunting there.

“For a number of years now, we have raised our voice to have the polar bear quota be increased,” said Attima Hadlari, chair of the KRWB.

The hunt in the M’Clintock Channel, which averaged 22 to 38 polar bears a year during the 1990s, ended abruptly in 2001 when the United States Fish and Wildlife Service stopped issuing permits to allow sport hunters to take trophies into the U.S. from bears hunted in that area after May 31, 2000.

That freeze on imports followed a 2000 survey that showed only 288 polar bears in the M’Clintock Channel rather than 700, as earlier estimated. The survey suggested that, if the hunt continued, the population would decline and be reduced to zero within 10 years.

The Nunavut Wildlife Management Board and the GN followed with a moratorium on polar bear hunting in the M’Clintock Channel.

At the KRWB meeting, several speakers said the moratorium on polar bear hunting was due to government meddling — and they slammed Greenpeace and animal activists for their opposition to the polar bear hunt.

Speakers also said they’re suspicious of the new survey because its results could be used as ammunition against renewing the hunt.

It would be more cost-effective to stop the surveys, they suggested, and believe what Inuit hunters say: that there’s a healthy bear population which wanders across two official polar bear zones — M’Clintock and the Gulf of Boothia.

At the KRWB meeting, Dyck argued that the proposed survey, with its combination of biopsy darting, collaring and tagging, would give a much larger, quantifiable picture of the polar bear population than the “snapshot” observations provided by individual hunters of the bears they see.

A traditional knowledge study will also be part of the survey, Dyck said.

The collaring would show where the polar bears go and supplement the survey’s ongoing sampling of genetic information and a 2009 study in which feces and hair sampling replaced intrusive tracking methods, he said.

Year one of the current survey found 155 bears, including 15 family groups, with 18 cubs, but Dyck told the KRWB he had no idea of actual polar bear numbers yet — and he appeared to suggest that he’d expect to find more family groups in 2015 if the population has increased a lot.

For now, Dyck said he had “no idea what the population estimate would be.” That’s because, until the genetic sampling results are in, it’s not clear yet whether the spotters on board the survey helicopter saw the same polar bears twice.

Numbers of polar bears are still considered as the primary basis for polar bear stock management, according to the 1973 “Agreement on the Conservation of Polar Bears,” which was struck long before anyone worried much about the integration of traditional knowledge into scientific research.

The members of the KRWB did not make a decision about whether to allow the GN collaring and tagging program to proceed because they said they wanted to consider additional information first.

At a June hearing of the NWMB in Cambridge Bay, hunters asked for the M’Clintock polar bear quota to be raised to 18.

In its lengthy submission to the NWMB, the GN suggested a cautious increase of the quota from three to six polar bears.

Information about the NWMB decision and the GN response is not expected before December.