GN has set goals, but hasn’t spelled out how to meet them or who’s responsible 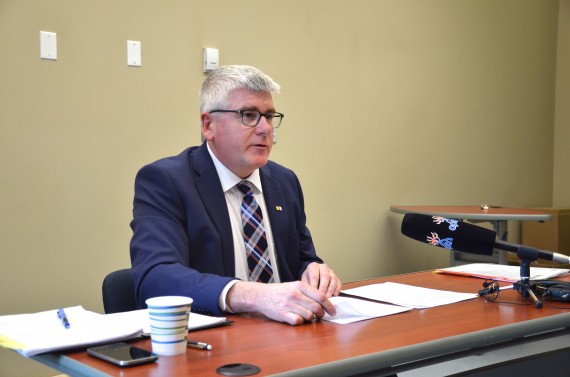 James McKenzie, the federal auditor general’s principal investigator, speaks with reporters at the Nunavut Research Institute in Iqaluit. The auditor general’s latest report finds that the Government of Nunavut is failing to properly assess and respond to the impacts of climate change. (PHOTO BY STEVE DUCHARME)

The Government of Nunavut is failing to properly assess and respond to the impacts of climate change within the territory, Canada’s auditor general has found.

The territorial government has prepared several in-depth reports and action plans for dealing with climate change, but “did not have implementation plans that outlined how and when the objectives of the strategies would be met and who would be responsible for what,” explains a report by the auditor general, tabled at the Nunavut legislative assembly on Tuesday, March 13.

The government also never publicly reported on its efforts either, so the lack of transparency resulted in those failures never being addressed, the audit said.

The auditor general issued 10 recommendations, ranging from the establishing of firm timelines and objectives for strategies, to improving departmental communication, public reporting and infrastructure analysis.

All recommendations were accepted by the organizations included in the audit: the departments of Environment and Community and Government Services, the Qulliq Energy Corp., the Nunavut Housing Corp. and Nunavut’s Climate Change Secretariat.

The auditor general’s principal investigator, James McKenzie, walked through the report with reporters at the Nunavut Research Institute in Iqaluit.

“From reduced Arctic sea ice to warming permafrost, the impacts of climate change are visible across Nunavut,” McKenzie said.

And despite an “impressive” level of expertise on certain climate change issues within the GN, McKenzie said that a five-year action plan drafted by Nunavut’s Department of Environment in 2014 was never finalized or released.

Another strategy unveiled by the Environment Department in 2011, entitled “Upqagiaqtavut: Climate Change Impact and Adaptations in Nunavut,” did not establish who was responsible for the 11 objectives laid out in the plan.

The same was true for a massive 42-point energy strategy released in 2007, which aimed to reduce Nunavut’s dependency on fossil fuels and improve energy security.

“We found that it did not state who was responsible for implementing about two-thirds of the actions and did not set any timelines for completing actions,” the audit reported.

The disorganization spread to other climate change actions by the CGS and housing corporation that were meant to address the impacts of melting permafrost on Nunavut buildings.

Mandated semi-annual inspections of government buildings were often done annually instead, due to a lack of resources or weather-related problems, the audit said.

“We found that the level of detail in the assessment reports [of the buildings] that were completed varied,” according to the auditors.

“The assessments also did not always follow a standardized template, which could have helped ensure that all relevant aspects of a building, including structural aspects, were considered.”

The housing and power corporations were credited with exploring renewable energy options and increasing energy efficiency within housing units, but the auditors recommended both organizations establish renewable-energy targets with firm timelines for implementation.

McKenzie explained that a promised inter-departmental working group on climate change was never established, but could have helped the GN co-ordinate its response to climate change and sustain its various projects.

The auditor general’s representatives will be back in Nunavut to discuss the findings of the report with MLAs during a special caucus meeting scheduled May 1.