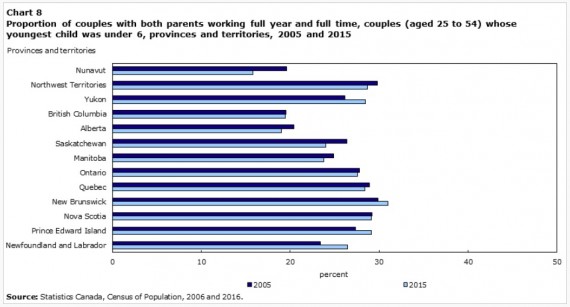 The share of Nunavut families with two income earners has taken a dive, according to a new StatCan report.

Nunavut straggles behind the rest of Canada when it comes to its share of households with two parents both holding down full-time jobs year-round, according to a new report released by Statistics Canada.

And the number of Nunavut families with two employed parents has shrunk at a time when these proportions changed little at the national level, between 2005 and 2015.

The study, which uses census data from 2015, found that 25 per cent of Canadian couples with at least one child under the age of six have two parents working full-time all year.

As well, 37 per cent of Canadian couples with a youngest child aged six to 17 had two parents working full-time and year-round.

However, even though Nunavut had some of the lowest employment rates back in 2005, the numbers continued to decline in the last 10 years.

On May 15, StatCan released an Insights on Canadian Society analysis of employment patterns for Canadian families with children.

The study used census data to look at changes in work activity between 2005 and 2015, in order to understand regional differences in employment patterns for Canadians―and how they have changed with time.

The analysis found that Nunavut has the lowest proportion of families working full time and year-round, for both age categories of children, and the numbers have decreased even further over the last 10 years.

In one portion of the analysis, StatCan looked at the employment data of families that had a youngest child under the age of six.

In 2005, Nunavut had tied for last place with British Columbia at 19.6 per cent. The national average, the study found then, was 25 per cent.

But while B.C. only reduced its rate by 0.1 per cent in the last 10 years, Nunavut went down 3.8 per cent—now sitting at the lowest proportion in the country with just 15.8 per cent.

This is nearly half that of the highest, New Brunswick, at 31 per cent, which is followed closely by Nova Scotia (29.2 per cent) and Prince Edward Island (29.1 per cent.)

Nunavut had dropped again to last place by 2015 when it comes to the employment rate of couples aged 25 to 54 with older children, between the ages of six and 17.

During those 10 years the proportion went from 35.5 per cent to 27.3 per cent. This rate is followed by B.C. with 30 per cent as the second lowest. The Northwest Territories had the highest rate, with 47.9 per cent.

Factors like the price of child care, labour market conditions, demographics and the gender distribution of household work may influence the employment patterns of couples who have children, the study said.

Post-secondary education also seems to play a role in these numbers. The analysis found that work activity declined for Canadian couples with children where both partners had at most a high school diploma.

Another group that is seeing lower employment numbers is single mothers.

The work activity of single parents in Canada declined over the past decade, according to the analysis.

Among single mothers with a child under six, one-third reported no employment in 2015, compared with less than 30 per cent back in 2005.