“Our ultimate goal is to lower that number” 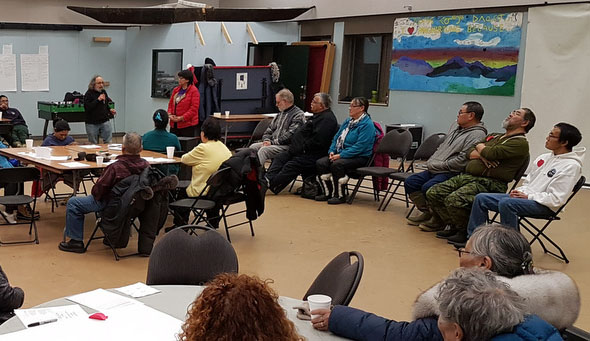 A Pangnirtung group used Inuusivut Anninaqtuq’s funds to host a series of workshops focused on the prevention of early childhood adversity, a well-documented risk factor for suicidal behaviour. (PHOTO COURTESY OF INUIT ILAGIIT)

The year 2017 marks the lowest number of deaths by suicide that Nunavut has seen in a decade.

The Office of the Chief Coroner counted 25 suicides across the territory last year, down from 32 in 2016, and the lowest number in any given year since 2007.

But while researchers and mental health advocates in the territory can agree that the fewer deaths, the better, they say more data is needed to see if Nunavut’s suicide rate is actually on a downward trend.

“There is still a lot of loss across the territory, and there are still a lot of people grieving. Our ultimate goal is to lower that number. If we accomplish that over a long-term period, then I can feel like we’re improving things,” he said.

Nunavut’s suicide rate is roughly 10 times higher than the national average. The year 2013 marked the highest number of suicides Nunavut had recorded since the territory was created, with 45.

But Jack Hicks, a statistician and suicide researcher, said looking to a single-year count of deaths by suicides is too random to offer any real insight into the issue.

Hicks prefers to look at the territory’s suicide rate over a five-year rolling average, which—considering the two most recent five-year periods—does indicate a slight downward trend in Nunavut’s suicide rate.

But suicide rates in the territory have fluctuated over the years.

“For that reason, while we can take heart from last year’s numbers, we really need another five or 10 years of data before we can claim to have brought the rate down,” Hicks said.

In the meantime, the Government of Nunavut, Nunavut Tunngavik Inc., the Quality of Life Secretariat and the Embrace Life Council are working to make that a reality.

“Over the last year, we have significantly more resources available because we want to bring down that number,” said Karen Kabloona, the assistant deputy minister for quality of life at the GN’s health department.

“We focus a lot of our work on communities who need and want that support.”

That includes more intensive training, she said. More than 2,000 Nunavummiut have now completed Applied Suicide Intervention Skills Training, or ASIST, as well as training on topics like youth self-injury and bereavement support.

In Pangnirtung this past weekend, a local wellness non-profit group, Inuit Illagiit, completed a two-week series of workshops for 140 local youth, parents and elders, using some of the action plan’s funds.

Although the Pangnirtung group’s mandate is to address poverty in the Baffin community, the suicide prevention strategy has broadened its scope to include early risk factors.

“Our workshop focused less on suicide prevention but more on the prevention of early childhood adversity, which is a well-documented risk factor for suicidal behaviour,” said Markus Wilcke, a retired nurse and Inuit Illagiit volunteer.

Factors like living in overcrowded homes and food insecurity can create stress within families and lead to parental neglect and in extreme cases, child abuse, he said.

Wilcke said the workshop identified what issues Pangnirtung families struggle with the most and what services they need to overcome those challenges and raise healthy families.

Next, the community’s new Pujualussait Society will take on the challenge of creating and delivering wellness programs targeting local families.

Incidentally, the coroner’s statistics revealed that Pangnirtung did not lose any residents to suicide in 2017—the first year that’s happened since 2000.

“It is significant,” Wilcke said. “But one warm winter doesn’t indicate the climate is changing. What’s more important is that the concerns were raised, that there are hardships in people’s lives and that resources aren’t adequate.”