Nutrition North subsidies to be added to receipts by next April: AANDC

“[It’s] an important and needed step to show clear transparency” 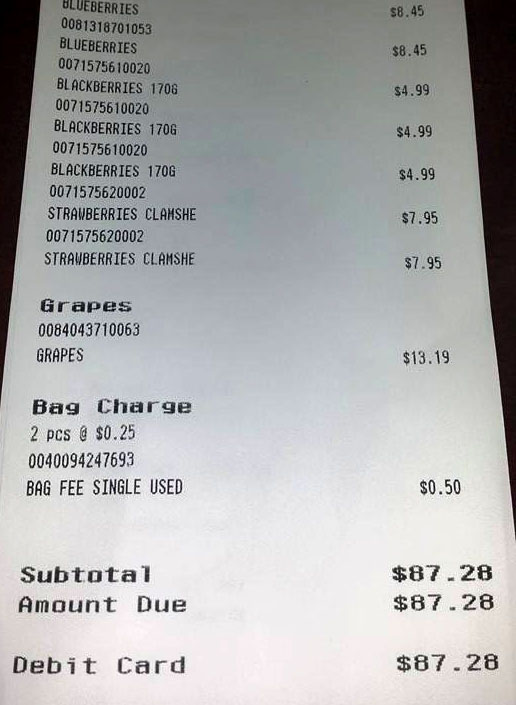 Receipts such as this, posted on the Feeding my Family Facebook page, will soon include subsidy information on individual items.

By next spring, shoppers in Nunavut and Nunavik will be able to see their Nutrition North savings on their sales receipts.

Bernard Valcourt, the minister of Aboriginal Affairs and Northern Development Canada, announced July 27 that a point-of-sale system will be made mandatory for Nutrition North retailers by April 2016.

This means that savings will be itemized on customers’ receipts.

That’s the latest move to bring more transparency to the federal program, which subsidizes the cost of food and non-prescription drugs in all Nunavut and Nunavik communities.

“The advisory board determined that showing the Nutrition North Canada subsidy savings on the sales receipt is an important and needed step to show clear transparency,” said Nellie Cournoyea, vice-chair of the board, in a July 27 release.

“We are encouraged that retailers have taken on the challenge, and that the minister supports our recommendations. We remain committed to making a difference for northerners and their families.”

That advisory board, an independent body set up to gauge and report citizens’ concerns about the program, has recommended that customers be able to see the NNC subsidy outlined on their grocery bills.

Printing out savings at the point-of-sale would allow shoppers to see both “the price of the product and the discount, or subsidy from NNC,” Cournoyea said following a board meeting in Iqaluit earlier this year.

It will be mandatory for registered retailers to have that system in place by next April, with the exception of smaller businesses which receive less than $450,000 in NNC subsidies each year, such as Arviat’s Eskimo Point Lumber Supply.

And certain stores are ahead of the game: the Fédération des coopératives du Nouveau-Québec, which operates co-op stores in Nunavik’s 14 communities, has already implemented such a system voluntarily.

North West Co. spokesperson Derek Reimer said all 67 of his company’s registered stores will have complied with the new point-of-sale system in advance of the mandatory date.

“We want the public to be confident that they have received the full subsidy on their purchases,” he said.

Arctic Co-ops Ltd. spokesman Duane Wilson said that all of its eligible stores, including Arctic Ventures in Iqaluit, will become part of a coordinated point-of-sale system upgrade, with the exception of the Grise Fiord co-op, which has opted to develop its own system.

Neither company would say how much it would cost them to implement the new system.

But the move hopes to relieve criticism around the subsidy program, which was highlighted in a November 2014 Auditor General of Canada report.

It found the NNC was not ensuring that northern retailers pass the full subsidy on to customers.

In a move this past spring, the federal government required retailers registered under NNC to make profit margin information available to auditors.

NNC’s advisory board held its latest meeting July 27 in Kugluktuk.