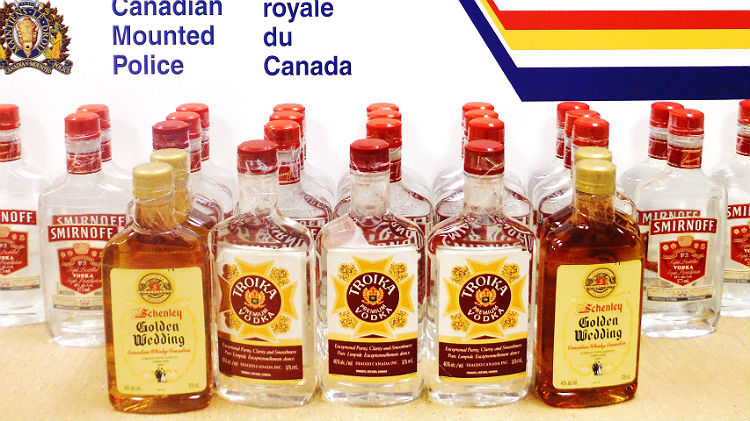 This Yellowknife RCMP photo shows some of vodka and whiskey, bound for Kugaaruk, that police seized Dec. 22 at the Yellowknife airport. (PHOTO COURTESY OF THE RCMP)

Christmas was a bit drier than it could have been in the western Nunavut community of Kugaaruk, a community of about 800 people where the possession of alcohol is prohibited.

Shortly before 8 a.m. that day, Yellowknife RCMP members were alerted after airport officials located a large quantity of alcohol inside a traveller’s luggage, the RCMP said in a new release.

Police seized 28 375-millilitre bottles, or mickeys, of vodka and whiskey destined for Kugaaruk.

“Additionally, the individual who was transporting the alcohol exceeded the personal limit allowed on a passenger plane,” police said.

A regulation under the Transportation of Dangerous Goods Act says airline passengers may carry alcoholic beverages, in retail packaging, containing more than 24 per cent but not more than 70 per cent alcohol by volume onto aircraft.

But the alcohol must be in receptacles not exceeding five litres, with a total net quantity per person of five litres.

No charges are pending in the Dec. 22 seizure, Yellowknife police said.

In a local plebiscite held in Kugaaruk on March 5, 2013, about 60 per cent of those who cast ballots voted to keep their community dry.

Anyone with information in relation to the illegal sale and or distribution of alcohol and drugs can contact the Yellowknife RCMP at 867-669-1111 or Crime Stoppers program at 1-800-222-8477, at www.nwtnutis.com or send a text to: NWTNUTIPS at 274637.