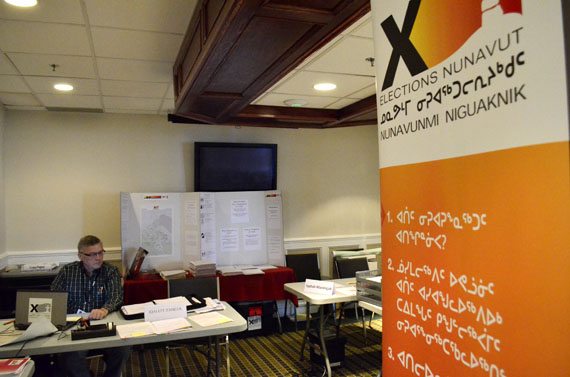 The Elections Nunavut office at the Hotel Arctic in Iqaluit, where workers are overseeing elections for Iqaluit’s four new constituencies. (FILE PHOTO)

Nunavut voters in 20 of 22 constituencies will head to the polls Oct. 28 for a territorial election that attracted 73 candidates, following the deadline for candidate declarations at 2:00 p.m. local time Sept. 27.

That’s far more than the number of hopefuls who put their names forward for the confused election held Oct. 27, 2008, when only 46 filed declarations.

This year, two candidates already know they’ll be members of the next Nunavut legislative assembly: Kugluktuk candidate Peter Taptuna and Netsilik candidate Jeannie Ugyuk, each of whom are incumbents, have won their seats by acclamation.

Ugyuk’s constituency is new, comprising Taloyoak and Kugaaruk. In the last assembly she represented Nattilik, which then comprised Taloyoak and Gjoa Haven, following her victory in a by-election held April 26, 2010.

Taptuna has held his seat since 2008, when he took 59.5 per cent of the vote to defeat Donald Havioyak.

Notably absent this time around is Hunter Tootoo, the former speaker, cabinet minister and MLA for Iqaluit Centre, whose name did not appear on the list of declared candidates after the 2:00 p.m. deadline Sept. 27.

Go to the Elections Nunavut website to find information for candidates and voters, including maps of the new constituencies and election manuals.