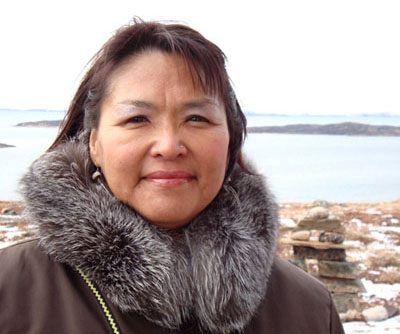 Okalik Eegeesiak, the president of the Qikiqtani Inuit Association, will serve as chair of Nunasi Corp. for a one-year term. (PHOTO COURTESY OF QIA)

The board that oversees the financially-troubled Nunasi Corp. has chosen a new chair for Nunasi’s board, Okalik Eegeesiak, the president of the Qikiqtani Inuit Association.

This means the new board comprises the president of each of the three regional Inuit association and the president and chairperson of each regional development corporation.

In recent years, some of Nunasi’s most important subsidiaries, such as Northern Transportation Co. Ltd. and Canadian North have not done well financially.

Nunasi has also been selling off some assets to raise cash.

This past fall, Wilf Wilcox, Nunasi’s outgoing chair, told delegates at the Kitikmeot Inuit Association’s annual general meeting that Nunasi will not pay dividends to Inuit organizations for at least two years.

Norterra, the Nunasi subsidiary that owns Canadian North and NTCL, has been forced to ask its owners for cash to cover its operating losses.

And the Kitikmeot association made a $2 million loan to Nunasi that was repaid by December 2012.

Nunasi, founded in 1976, when it was called the Inuit Development Corp., has always presented itself as a Nunavut-wide development corporation.

But in recent years, the firm, which has been headquartered in Yellowknife for many years, found itself competing with other Nunavut land claim based businesses.

“I’ve been given the opportunity to lead the path in which the Regional Inuit Associations would like to go and I thank the board for their vote of confidence. This appointment is indicative of the positive changes that are being made to unify our companies for the benefit of Inuit,” Eegeesiak said in a news release.