Old vehicles can go to the Iqaluit dump again, for a fee 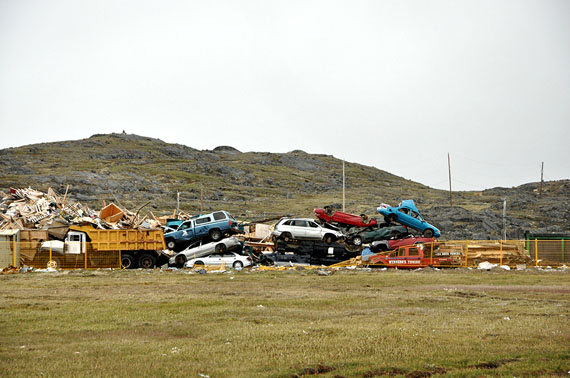 On Aug. 1, the City of Iqaluit will lift a moratorium on the storage of end-of-life vehicles at the Iqaluit dump, imposed last year during the dumpcano crisis. (PHOTO BY THOMAS ROHNER) 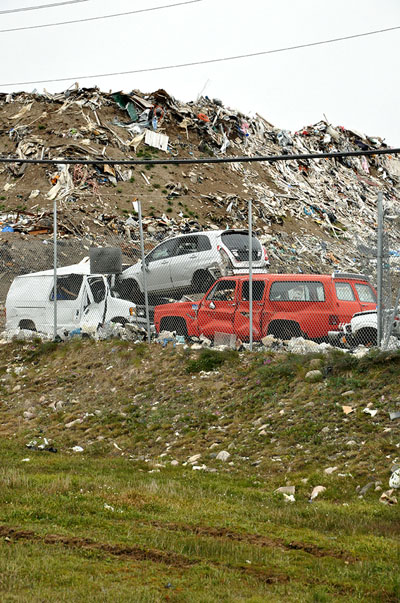 As of Aug. 1, it will cost cost $200 each to bring end-of-life cars and trucks to the Iqaluit dump. On top of that, tires and batteries will cost an extra $15 each. Snowmobiles will cost $60 each, and the permit fee for large vehicles will be calculated at a rate of $50 per cubic meter. (PHOTO BY THOMAS ROHNER)

The smoke from Iqaluit’s infamous 2014 dump fire — dubbed “dumpcano” by some residents — may have cleared a year ago, but City of Iqaluit officials are still taking steps to restore full service at the dump site.

Beginning Aug. 1, Iqalungmiut can bring end-of-life vehicles, including cars, pick-up trucks and snowmobiles, to the landfill, a July 28 news release from the city says.

City officials issued a moratorium last summer on end-of-life vehicles at the dump because of the ongoing fire, Matthew Hamp, director of public works and engineering, told Nunatsiaq News.

And now that the moratorium will be lifted, Hamp said he hopes the city can do a better job at collecting the fees associated with vehicle disposal.

That’s why residents will need to go to city hall to buy a disposal permit before bringing their vehicles to the dump, Hamp said.

“Collecting the fees has been an issue in the past, so this is a way to try and capture those fees and control the process better.”

The cost of the permit depends on the type of vehicle and whether it’s been stripped down, according to the City’s news release.

Cars and pick-up trucks, for example, will cost $200 to bring to the landfill, according to the release, but tires will cost an extra $15 each, as will a battery.

Snowmobiles cost $60 to bring to the landfill site, and vehicles larger than pick-up trucks will be charged $50 per cubic metre, according to the release.

Every few years, when the city has collected enough vehicles to hire a contractor, the vehicles will be shipped to the South during the sealift season, Hamp said.

“If we don’t have enough volume we’d be paying through the nose to try to get rid of them,” he said.

The two biggest challenges in disposing of vehicles, Macmunn added, are finding the space to store them and removing all of the hazardous liquids and materials before storing them.

The recycling of vehicles is a chronic problem in Nunavut, due largely to shipping costs to send scrap metal south during the sealift season.

The problem prompted Summerhill Impact, a Toronto-based organization, to initiate a vehicle-recycling program in Arviat and Gjoa Haven last summer.

They are hoping to get government contributions to continue their work in other Nunavut communities.