On anniversary of sister’s death, Nunavut MLA calls for end to domestic violence

Adam Arreak Lightstone’s sister and her daughters were killed on June 7, 2011 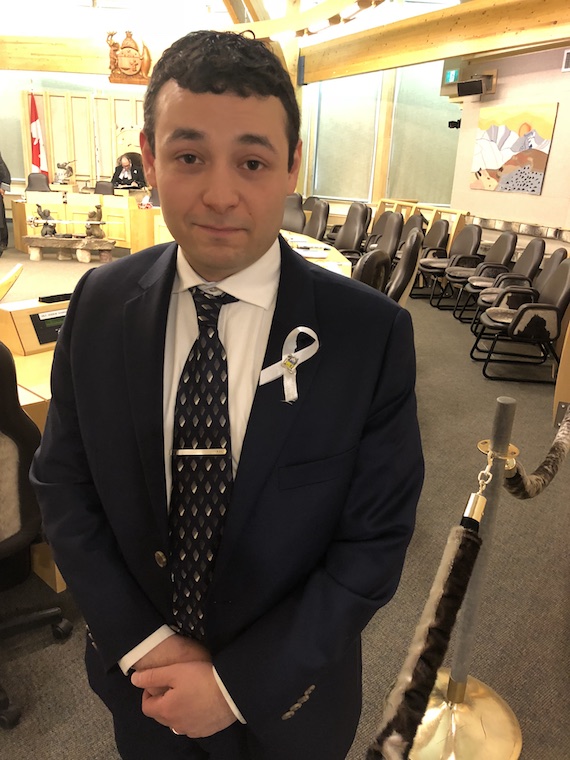 Nunavut MLA Adam Arreak Lightstone, who represents the riding of Iqaluit-Manirajak, stands in the territorial assembly chamber on June 7, the seventh anniversary of the violent death of his sister Sula Enuaraq, along with that of her two daughters. You can see the white lapel ribbon, a symbol of the movement of men and boys against domestic violence. (PHOTO BY JANE GEORGE)

Pushed by personal grief and family tragedy, MLA Adam Arreak Lightstone, who represents Iqaluit-Manirajak in the territorial legislature, spoke out in the assembly chamber Thursday against domestic violence.

June 7 marks the seventh anniversary of the death of his sister Sula Enuaraq, 29, and her two daughters, Aliyah, two, and Alexandra, seven, in Iqaluit.

They were found dead at their home, while Enuaraq’s husband, Sylvain Degrasse, 42, was found dead in the city’s cemetery earlier the same day, June 7, 2011, with a rifle across his chest.

Arreak Lightstone, wearing a white ribbon on his lapel to represent the movement of men and boys against domestic violence, first stood up to make a member’s statement to denounce domestic violence.

“Today’s date is one which my family and I mark with grief,” he said. “To lose close family members at a young age is always painful. To lose them as we did is unbearable.”

The statement’s message: to stop the silence around domestic violence, which occurs all too often in Nunavut, and is often association with mental illness and substance abuse.

“Government actions alone cannot prevent tragedies like the one that struck my family,” Arreak Lightstone’s statement said. “However, the decisions that we make as a government about where to invest our limited resources do matter, and doing what we can to stop domestic violence matters very much.”

Several of his fellow MLAs wiped away tears during the statement, reflecting the shared pain caused by widespread domestic violence in Nunavut: Iqaluit recorded the second-highest average in Canada for police-reported acts of violence against women between 2008 and 2015.

“I feel for you,” said Community and Government Services Minister Lorne Kusugak of Rankin Inlet, when he next stood up to speak in the chamber. “My aunt was murdered and it hurts every day.”

Later during the day’s proceedings, Arreak Lightstone tabled a document which contains 15 recommendations from an inquest by the Nunavut Coroner’s Office and the Domestic Violence Death Review Committee into deaths involving domestic violence.

These are designed to enhance risk assessment and provide more early intervention, he said.

They took five years to produce and were never released to the public, he said.

Arreak Lightstone said he wanted to make the recommendations public so the work of the inquest, signed off by Padma Suramala, who is no longer Nunavut’s chief coroner, was not in vain.

The recommendations will now become part of the public record of the Nunavut legislature on June 7, 2018 and will be posted online.

The recommendations can also be read below in the attached document.

Among the recommendations, calls for more public education and increased awareness and training for health care providers, police and teachers on domestic abuse as well as improved education on firearm safety.

The inquest report also includes a mention for the need to continue supporting Nunavut shelters.

Arreak Lightstone said he planned to raise questions in the legislature during this sitting about how well the Nunavut government had worked to respond to the recommendations.

Suggestions for actions to prevent domestic violence were also raised by Sula Enuaraq’s aunt, Susan, and Susan’s daughter Killaq Enuaraq-Strauss, who testified earlier this year before the National Inquiry into Missing and Murdered Indigenous Women and Girls in Rankin Inlet.

Sula Enuaraq had been a victim of abuse for many years, they said.

And they reported that, in the days leading up to Sula’s death, she had tried to get into the Qimaavik women’s shelter in Iqaluit, but was turned away because the facility was full.

Her family also said the RCMP should have an Inuktitut-speaking staffer to inform families of hard news as well as mandatory cultural sensitivity training for the force’s officers and staff in Nunavut.