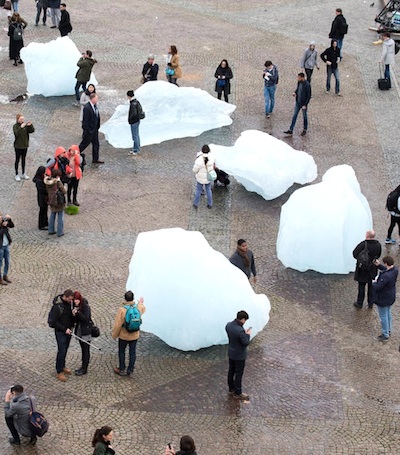 Visitors to “Ice Watch” at Place de la République in Paris walk around blocks of Greenlandic ice, taking photos of the blocks as they melt. The installation is the work of Greenlandic geologist Minik Rosing and Icelandic-Danish artist Olafur Eliasson, aimed at drawing attention to global warming. “Art has the ability to change our perceptions and perspectives on the world, and Ice Watch makes the climate challenges we are facing tangible. I hope it will inspire shared commitment to taking climate action,” Eliasson has said. The Ice Watch installation will remain on display until Dec. 11. Any remaining chunks of Greenland glacier ice will be taken to local French schools and cultural institutions for a community education program. (PHOTO BY O. ELIASSON) With two more days remaining before negotiators at the COP21 climate change talks in Paris hope to sign off on a global agreement aimed at reducing climate change, Inuit leaders and other Indigenous groups are lobbying hard for language in the agreement that protects the rights of Indigenous peoples.

Right now, a draft proposal negotiators are considering contains only a passing reference to Indigenous peoples.

The United Nations Framework on Climate Change meetings are called COP21, because it’s the 21st time there’s been such “a conference of the parties.”

Together, the Inuit leaders discussed the draft of a joint declaration on climate change in the Arctic — “to send a united message to the world, to recognize and support the special challenges that climate change poses for Arctic peoples and the right to development in the Arctic,” said a Dec. 7 release from the Greenland government.

“Our joint Inuit voice and our traditional know-how from across the Arctic should be heard and included in international policy-making. Most importantly, Arctic indigenous peoples have to be ensured equal access to the right to development. Indigenous peoples’ rights and interests must be included in the COP21 outcome document,” Qujaukitsoq said in a joint statement presented Dec. 8, at the Arctic Day side-event at COP21.

Inuit remain “deeply concerned about the impacts of climate change on sea ice and our way of life,” said Taptuna.

Taptuna said earlier this week that “climate change disproportionately affects the Arctic,” where temperatures are set to rise two to three times more than in the rest of the world.

“We stand before you today, with the Government of Greenland and the Inuit Circumpolar Council, asking the United Nations to reach an agreement that accounts for the impacts of climate change on the Arctic,” he said.

In the statement, Eegeesiak urged the negotiators to draw on the experience of indigenous people, who are “most directly impacted by climate change.”

“The Paris agreement and its implementation must therefore respect the rights of indigenous peoples for the betterment of our planet,” Eegeesiak said.

The International Indigenous Peoples Forum on Climate Change also wants to see more mention of the rights of indigenous peoples in the final Paris document.

Among the changes it wants to see, paragraphs stating, “because their traditional lifestyles are based upon, related to, and dependent upon the natural world, Indigenous Peoples are the most adversely affected by climate change, even though they bear the least responsibility for it.”

But many of the 195-plus nations — such as the European Union — now looking at the wording of the final COP21 document are worried about the liability issues which these words might carry.

Prime Minister Justin Trudeau said Dec. 4 he had instructed Canada’s chief negotiator for climate change, Environment Minister Catherine McKenna,”to strongly advocate for the inclusion in the Paris Agreement of language that reflects the importance of respecting the rights of Indigenous peoples. We have also highlighted the importance of considering Indigenous traditional knowledge alongside scientific analysis.”

To bring that message to Paris, an all-Indigenous flotilla of kayaks took to the waters of the river Seine Dec. 6.

The event was followed by a news conference with Indigenous leaders delivering strong messages: warnings about the worst consequences of climate change, and “holistic solutions to protect Mother Earth,” organizers said.