Inuit to gather on Parliament Hill 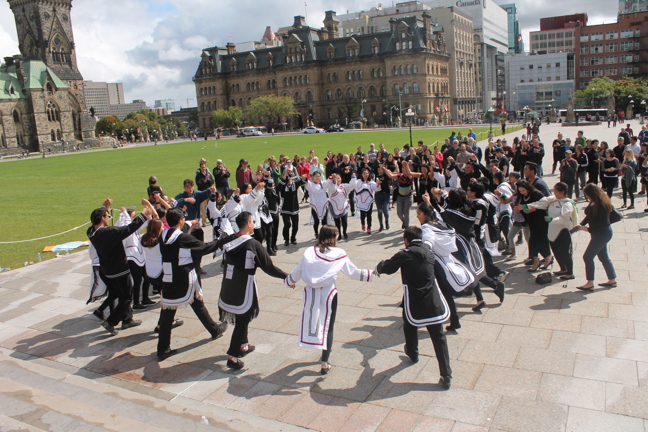 Today, on World Suicide Prevention Day, Inuit gathered at Parliament Hill in Ottawa to draw attention to the need for more suicide prevention efforts in Inuit Nunangat, where the suicide rates are roughly 10 times higher than in Canada as a whole.

At 12:15 p.m. students from the Ottawa-based Nunavut Sivuniksavut college program were to perform in front of Parliament. Then, Monica Kanayuk-Ell of the Inuit Circumpolar Council was scheduled to speak at 12:40 p.m.

Communities in the North will also host events today: in Cambridge Bay, people are to arrive at the Luke Novoligak Community Hall at 6:30 p.m. At 8 p.m., there will be a candle-lighting ceremony to show support for suicide prevention, the survivors of suicide and to remember those lost to suicide.

In Rankin Inlet here will be a Walk for Life starting and ending at arena at 7 p.m., followed by refreshments and an Embrace Life Concert featuring Looee and James Arreak at 8:30 p.m.

After the concert everyone will be releasing lanterns into the sky, said a post on the Rankin Inlet Facebook news page.

“This Embrace Life Day, I ask that Nunavummiut hold onto hope, and celebrate our determination and strength. Our communities are blessed in family, knowledge and potential. We are all connected, and we are all loved,” said Nunavut Premier Joe Savikataaq in a Sept. 10 message.

In Baker Lake, more than 100 Nunavummiut started to gather in Baker Lake for a three-day-long United for Life gathering for suicide prevention.

The project has received ethics approval from the Université du Québec à Montréal, and will apply for a research permit from the Nunavut Research Institute shortly after the staff person starts work Sept. 17.

The project will focus on people who have been seen in a medical facility for a suicide attempt, said Jack Hicks, a statistician, suicide researcher and former Nunavut resident, during a presentation at the recent International Congress on Circumpolar Health in Copenhagen.

In Nunavut, like elsewhere, people who attempt suicide are at greater risk of repeated attempts, and of dying by suicide, Hicks said.

“We’re not trying to find out if follow-up with people who have attempted suicide will reduce the percentage who re-attempt, and possibly die. The global evidence base is rock solid that is does. The question is whether a follow-up process can be ‘operationalized’ in the Nunavut context,” Hicks told Nunatsiaq News.

The hope is that the project’s intervention can make a big difference in Nunavut, where officials have declared suicide a public emergency.

The partners in this project include Nunavut’s Health Department and the Embrace Life Council. The project is funded by the Canadian Institutes of Health Research, as part of the Global Alliance for Chronic Diseases’ mental health initiative.

As part of the project, Hicks and the other researchers will try to look at factors around community involvement in following up with persons who have attempted suicide and the role of stigma associated with mental health and suicide in Nunavut.

These are all issues on which action has been called for by members of the public in Nunavut this year, notably in Iqaluit and in Pangnirtung.

Meanwhile, in Nunavik, the regional health board launched an awareness campaign today called “Reach Out Nunavik,” which features its own Facebook page.

The purpose of the campaign is to help Nunavimmiut “be more attentive to and supportive of vulnerable persons, reinforce protective factors, and publicize the available assistance and support resources,” the health board said in a news release.

The health board, whose full title is the Nunavik Regional Board of Health and Social Services, also urged Nunavik residents to promote suicide prevention through a variety of activities, including:

• Engage in an activity conducive to well-being.

• Be receptive and available for loves ones, friends and family members undergoing.
distress.

• Participate in the community activities.