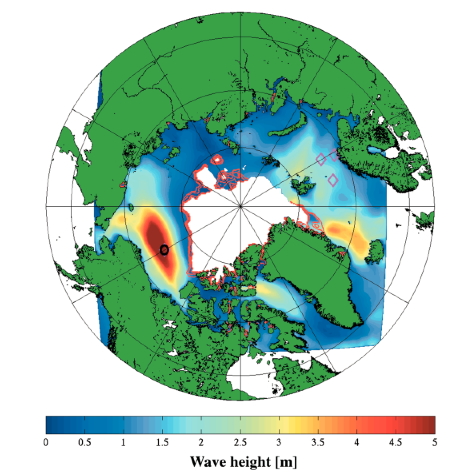 This map, generated by the study’s authors, shows a model of how a storm in September 2012 impacted wave height in the Arctic Ocean. The black circle in the Beaufort Sea shows where the Nortek Acoustic Wave and Current sensor, a mechanism for measuring waves, was moored. The NAWC was located 50 metres below the surface of the water and used sonar pings to measure, hourly, the distance from the instrument to the top of the sea’s surface.

Cargo, research and cruise ships can add one more thing to the list of unpredictable obstacles coming to a warmer, less frozen Arctic sea: big waves.

Researchers at the University of Washington studying the ice-free Beaufort Sea in 2012 have concluded that not only do the warmer, open northern waters develop surface waves from wind but that those waves can develop into large swells.

“It is possible that the increased wave activity will be the feedback mechanism which drives the Arctic system toward an ice-free summer,” say authors Jim Thomson and W. Erick Rogers in a recent study published in a journal called Geophysical Research Letters.

“This would be a remarkable departure from historical conditions in the Arctic, with potentially wide-ranging implications for the air-water-ice system and the humans attempting to operate there.”

Ocean surface waves are generated by winds blowing over the water’s surface. This is called “fetch.”

Swells grow from those persistent, prolonged winds over open water in a cascading effect, like ripples in a pond that grow out from the source.

Swells can continue to grow and travel long after the wind has stopped blowing, or even if it has changed direction.

Small swells grow into larger and larger swells when there is open water to carry them.

In the Arctic, plentiful coastlines and sea ice have tended to minimize waves and swell but Thomson and Rogers have discovered that in the Beaufort Sea, and likely elsewhere in the Arctic Ocean, more open water means more surface movement.

“This suggests that further reductions in seasonal ice cover in the future will result in larger waves, which in turn provide a mechanism to break up sea ice and accelerate ice retreat,” say the authors in their article, “Swell and sea in the emerging Arctic Ocean.”

For Nunavut, this open water phenomenon would likely be concentrated in Baffin Bay, Davis Strait and to a lesser extent in Foxe Basin, according to a model map produced for the study.

“The interaction of waves and ice is particularly complex because ice can suppress waves by scattering and dissipating wave energy, while the waves simultaneously break up the ice.”

They also suggest that waves and swell “can be a hazard to navigation and operations at sea.”

During a storm in September 2012, the authors noted that strong winds created waves five metres high in the open Beaufort Sea.

“The observations reported here are the only known wave measurements in the central Beaufort Sea, because until recently the region remained ice covered throughout the summer and there were no waves to measure,” the authors write.

The authors conclude that, “future scenarios for reduced seasonal ice cover in the Arctic suggest that larger waves are to be expected and that swells will be more common.”

This also has implications for coastal areas, they say, since more waves will lead to more coastline erosion.

Researchers studying the evolving climate in the High Arctic this summer are also studying the impact of increased open water in the North.

They suspect that naturally occurring gases emitted from spray and marine organisms increase the amount of aerosols in the air which could lead to greater cloud formation.