With referral, Nunavummiut can go to Mamisarvik Healing Centre 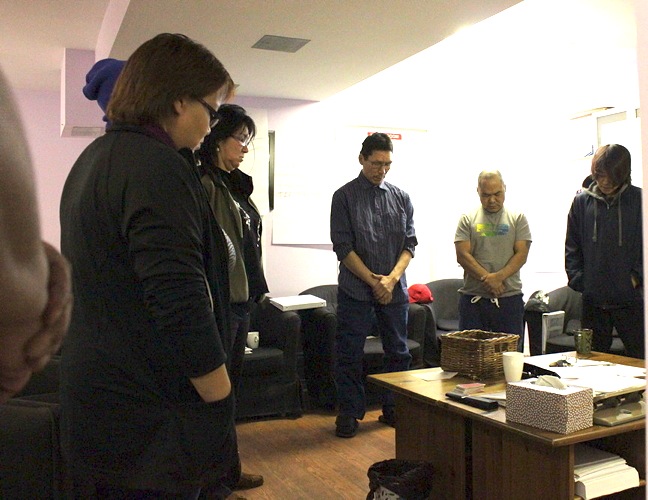 Mamisarvik Healing Centre clients pause for a prayer before a group therapy session in 2013. (FILE PHOTO)

Do you live in Nunavut and need help with overcoming addictions?

The Government of Nunavut’s health department said in a recent release that the GN will again help Nunavummiut head south for addictions treatment at the Mamisarvik Healing Centre in Ottawa.

The GN said it will provide funding for clients who are referred to the Mamisarvik program so they can travel to Ottawa. Health Canada will provide money directly to Mamisarvik to help the Ottawa-based Inuit community group, Tunngasuvingat Inuit, deliver its programming, the GN’s health department told Nunatsiaq News.

Mamisarvik’s residential trauma and addictions program for Inuit has been based out of a 12-bed facility on Russell Rd. in Ottawa. Launched in 2003 with Aboriginal Healing Foundation money, the centre was forced to cobble together other funding sources when the AHF fund ran out in 2013.

Then, in early 2016, TI announced Mamisarvik would have to close because it had run out of funding options, but days before the planned closure, Ottawa kicked in $1.3 million to keep the centre afloat for another year.

After almost shutting down in March 2016, Mamisarvik re-opened in October 2016 with a women-only program.

The service now offers a day program at TI’s building on 1071 Richmond Rd. in Ottawa.

The federal government offered no guarantee that the funding would continue beyond March 2017.

But the GN’s call for referrals would imply that Mamisarvik services are set to continue into 2017, although the Nunatsiaq News was unable to verify this with TI.

If you are interested in participating in the Mamisarvik program, you can contact the GN at 867-975-5959, or by email at mhaoot@gov.nu.ca to start your application process.